There is a saying:

If you live long enough everything will happen to you ­ both good and bad. This iron rule holds true on the ski slopes as well. In my many decades of skiing around the world , the balance of wonderful experiences far outweighs those I would rather forget. But the law of averages cannot be toyed with, a fact which I and my older daughter Eve confronted on our last trip to Attitash Bear Peak in the White Mountains of New Hampshire. 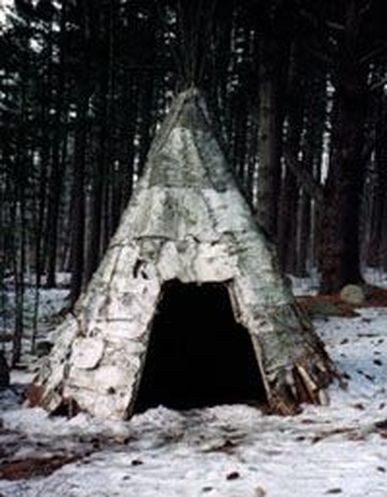 An old Abanake tent near Attitash
For our father/daughter weekend, we flew up from Washington to Boston's Logan Airport and made the two and one half hour drive to Attitash. I had not skied at Attitash since my high school days, when the mountain was a far smaller operation known for its policy of limited ticket sales and even scarcer sunshine.

There have been many changes over the years by a series of owners determined to expand the range of ski terrain and let in a little sunshine on those hard packed New England slopes. The first indication that things at Attitash had changed for the better was our accommodations at the slope side Grand Summit Hotel. It had the feel of a Colorado mountain resort hotel. The two of us had a suite with fold out couches and a queen size murphy bed ,alongside a full service kitchenette. The latter proved particularly useful in the mornings because we were able to skip a formal restaurant breakfast which can often be too slow for skiers anxious to hit the slopes. A quick bowl of cereal and a look at the local weather and zoom out the door to the chairlift nearby.

﻿"The snow is too perfect"

Eve at 14 is the oldest and, on the slopes the most proficient of my three children, having first skied under her own power at the age of three. If she has any alpine shortcoming, it is one familiar to all of those who have skied out West and then come East --  she abhors the site of black ice and the early morning crunching of hard pack. With only two days to ski, we made a point of getting out early on Saturday. Eve didn't like being among the first to ski the well-groomed slopes. Edging on the ridges where the sno-cats had been made the tell tale crunching sound like marbles skittering across a washboard. The noise was too loud and the suggestion too icy for Eve's taste.

​The skiing, Eve said, was "like a challenge but not the right kind of challenge. The snow was too perfect." As the morning progressed and the sun and skiers worked their magic we found ourselves drawn to Wandering Skis, beautiful scenic trail which was mostly wide with a good intermediate pitch and Avenger, the latter a double diamond which was steep but not bumpy. Wandering Skis and Avenger were both off the quad chair. There was enough sun to tan our sun-starved complexions. 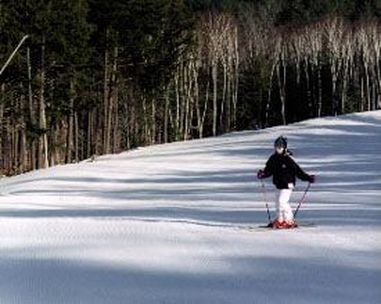 All alone in the White Mountains
Attitash, the original ski area, proved easier yet more exciting, principally because of the small mogul jumps on offer. Bear Peak offered more challenging terrain, with longer trails. We never needed a trail map because of the well- marked system. Signs always pointed out the easier way down -- easier not easy. Eve, who started the weekend with a nagging knee injury did find it difficult to navigate some of these options.

Yes the knee injury. Eve went down after an easy turn and couldn't get up. I made a quick decision to climb back up to the chair lift operator to call for the ski patrol. No sense taking chances trying to convince her to tough it out. She knew that she was hurt and unable to ski, and I had no reason not to trust her judgment.
The patrolmen arrived quickly, but were not wearing the recognizable red coat or first aid cross on their parkas. Within minutes they had wrapped Eve's leg in a cardboard brace, warmed her under lots of blankets and strapped her into the toboggan. As they made their way down the mountain, only Eve's head was visible around the orange reflective GoreTex wrapping that enveloped her body. She was in good spirits. Her leg was not broken, just reinjured and she was not shy about admitting that the ride in the toboggan was actually fun and quite comfortable.
﻿"I don't think people with bad injuries or older people would like it," she told me son afterwards. "The ride is fast and kind of bumpy and you can ask to go slower, but I didn't. The ride down was fun except sometimes really bumpy. I bounced around but I was not in pain. The snow kept flying in my face." She was smiling the whole way down. I was a bit more apprehensive. As a patrolman I had taken many "wrecks" off the mountain, but this was my first time shepherding one of my own kids.
﻿"At the bottom," Eve explained, " they were very careful. Both patrol people picked me out of the toboggan and carried me onto a table in the first aid room at the base of Bear Peak. The weird thing was they took me in and asked me a lot of questions. I really couldn't describe what was wrong with my leg.

Did I mention that my father, a physician had planned to ski with us that morning? Instead he accompanied us into the first aid room, and confirmed that Eve had suffered no more than a sprain. The staff were pleasant, efficient, and as helpful as they could be to both injured patient and anxious parent.
​
Eve hobbled away. Our skiing was over.... at least for the day. Next morning, bright and early, Eve, like a batter who has been hit by a pitch, was back in the box, anxious to jump on the alpine equivalent of a high fastball.