This article was originally published by the Family Travel Forum.
​For most families, a ski trip to the Rockies is, at best, a once-a-season endeavor.

With only one chance to get it right, mistakes, errors in judgment, and the vagaries of weather and airline schedules are magnified. As parents we try to minimize such problems – we buy the right clothing and equipment, check and maintain it, and build in time for possible weather and airline delays.

Snow conditions and mountainside weather are particular stumbling blocks to an enjoyable time on the slopes, particularly for kids. Too much or too little snow can reduce high expectations of a great trip to cries of “never again” from kids sold on the promise of a sun-filled romp down packed-powder slopes. My kids have endured the bitter February winds of Tremblant and fog-drenched slopes at Whistler. They’ve been frost-bitten atWaterville Valley and lost in the fog at Bretton Woods.  When they recall these visits, their most vivid memories are not the spectacular scenery but the cold and the poor visibility. 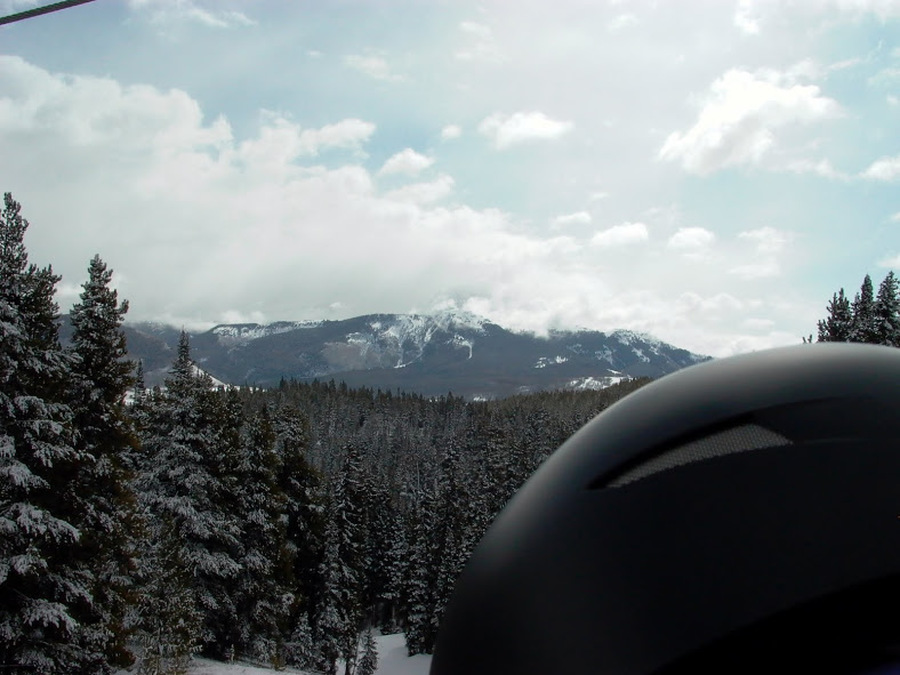 How then to maximize the chance that the once a year roll of the ski dice will come up seven? My experience with  three children and a bad weather-averse wife over many years suggests that the later (in season) and higher (in elevation) you travel, the greater the rewards for all concerned.

Our last trip according to this prescription was to Crested Butte, Colorado. My 12 year old Joshua and I arrived in early April for the resort’s last ski days, weeks after most skiers put up their skis for the off-season. Spring break was later than usual, a  quirk of the calendar which dictated our decision.

I have always enjoyed the ambiance of a resort’s last days. The crowds have deserted the slopes for other distractions and the locals, thus liberated from the high season crowds, are all smiles. There is never a problem getting a room, usually at off season prices. Lift tickets are half the high season price. And, and this is a key consideration for families with young or beginning skiers, the later the date the greater the chance of warm weather. Certainly by April there is little danger of bone crushing cold. I think very positively, encouraging my kids to bring shorts and t- shirts and plenty of suntan lotion. They like the idea of skiing in clothing usually reserved for the beach. 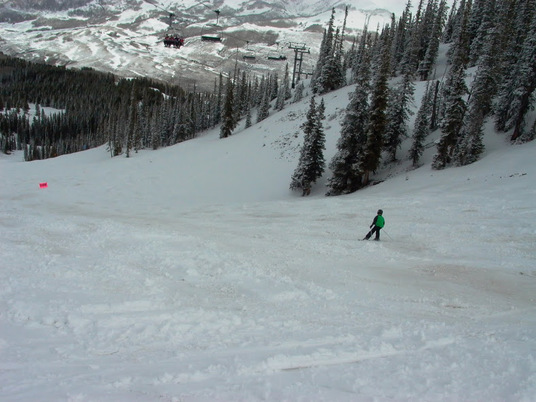 What about the snow you ask. A fair question to be sure. Snow conditions in the last days of the season are notoriously difficult to predict, especially months before when most plans are made. Many of the slopes at lower elevations – the ones favored by beginners -- are often closed for lack of snow or because the number of skiers does not warrant the expense of keeping them opened. This was not the case at Crested Butte, where with a base elevation of 9375 ft, the were still plenty of options within sight of the base area for beginning skiers. But it makes sense to do some homework and ask pointed questions about the number and classification of slopes that are open or that one can reasonably expect to be so.

Our interests were not beginner but the more advanced and expert slopes. We were among the handful of guests staying slope side inMountaineer Square, now undergoing extensive renovations after a welcome change in ownership, so hitting the mountain early was almost as easy as rolling out of bed. Not that there was any need to rush. There was hardly a lift line to be seen during our four days on the mountain.

Most of our days were spent skiing off the Paradise Express Lift and the nearby North Face T-bar. Paradise Bowl, which tops out at almost 12,000 feet elevation, is an intermediate’s “paradise”  --- wide open and moderately steep – no trees to worry about and not  much in the way of moguls either. Beginning skiers, if they can manage the first section leading to Yellow Brick Road, can wind their way down to the base. We chose the intermediate runs down to the bottom of  the Paradise quad – Forest Queen, Ruby Chief and Upper Treasury. Boarders can ski the Canaan Terrain Park and the Superpipe.

"The later (in season) and higher (in elevation) you travel, the greater the rewards for all" 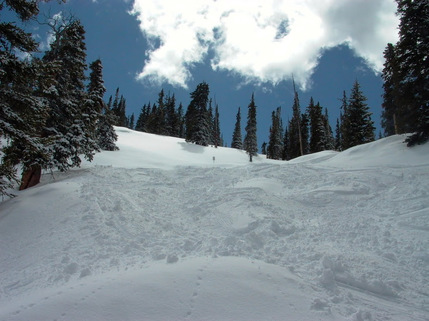 The new high speed lift at East River was closed for the last week of the season, so we hit the T-bar to the top of the North Face for some tree skiing through The Glades, Old Pro and Hawk Nest. These steep and narrow runs often open into more open glades that are best sampled when the snow is more plentiful and lighter. Josh was adamant however, about skiing double black diamonds, and who was I to say no!! I much preferred the still steep but more open burn next to the T bar. Though more difficult, it reminded me of the Big Burn -- a similar slope on the upper reaches of Snowmass. This run was particularly enjoyable after four to six inches of snow. Champagne powder it wasn’t but it was still light enough for us, as we caught the T-bar, to look anxiously up the mountain in the hope that untracked snow would  still await us.

The Silver Queen Express Lift runs from the base to just above the base of  The High Lift serving Tocalli Bowl. I was all but salivating to try my luck in the steep terrain, where I first skied some fifteen years ago. Josh wasn’t having anything to do with it, however. From our distant vantage point, the terrain seemed just that side of too intimidating.

Josh is my third child, and I’ve learned (the hard way) not to push young skiers beyond their instinctive limits. So it was no to The Headwall. She’d still be there on my next visit. 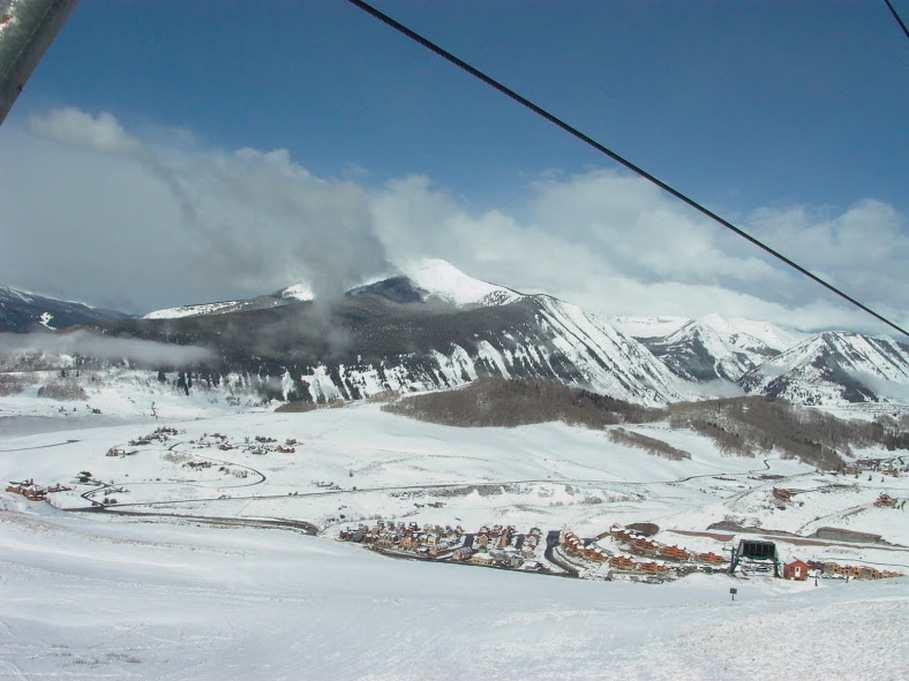 The open cruising runs off the Silver Queen quad – International and Twister --offered both speed and  steepness. The bump runs nearby were bone crushing. This late in the season, without lots of fresh snow, they were almost pure punishment. Josh, however, insisted. I watched as he all but disappeared in the troughs between the moguls, and waited for him to have his fill.

Crested Butte is somewhat of a stepchild of Colorado resorts. Telluride traded funky for chic a long time ago, but Crested Butte remains a small, idiosyncratic destination. If you’re looking for world class off-mountain amenities, this ain’t the place. It’s more like your home away from home – comfortable and familiar, and except for the steep glades and bowls, not too exciting. The mountain and the retail and hotel complex are in the midst of much-needed major facelift. Downtown Crested Butte, population 1600 – boasts a Main Street that reminds me of downtown Steamboat Springs circa 1980. But don’t let the simplicity fool you. Some of the best and most challenging Colorado skiing can be had at Crested Butte, even in April!