The article was originally published by the Washington Post
I've skied all over the world, but skiing at Steamboat is like coming home.
​
​Steamboat has been a favorite destination for reunions with old ski buddies, and for visits with various combinations of my growing family. On every occasion, at different periods of the ski season, the mountain itself and its namesake town a few miles to the north have not failed us. There are mountains where the terrain is steeper and the snow lighter, but Steamboat has succeeded in creating a challenging variety for all but the most aggressive, extreme skier. And where else can you ski with the venerable Olympian Billy Kidd, who still leads a throng of skiers on his daily 1 pm run down Heavenly Daze!

Steamboat was, in fact, home for me for two winters during the mid- 1970s. One day in December 1973, my college declared itself a victim of the OPEC oil embargo imposed after the October 1973 Arab-Israeli war, and announced it was closing down for the winter semester. I cursed my fate ... and bought a one way ticket to Steamboat.

During two snow-filled winters, I learned not just the finer points of washing dishes and waiting on the tables of rich Texans who considered Steamboat their second home. As a transplanted Easterner I had been weaned on the hardpack of New Hampshire. I had heard that untracked powder did exist, but I had also been taught to believe in the tooth fairy. 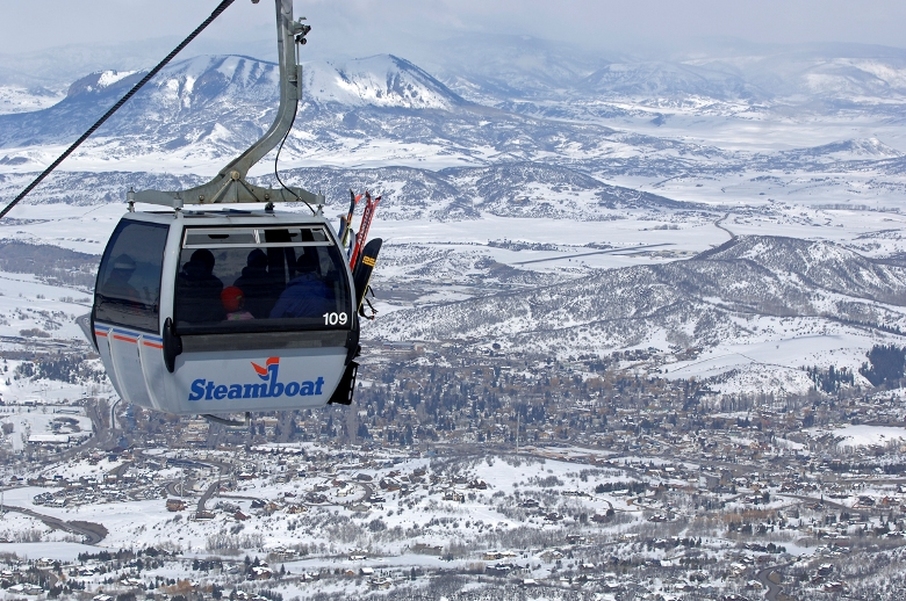 In Steamboat I became a believer. Sliding through the waist deep, virgin powder that filled birch glades of the Steamboat's Shadows trail, I was mindful of only the whooshing of nearby skiers who, like me, were deep into ski heaven. Even the bumps on White Out softened under a blanket of light Colorado gold. Perhaps the tooth fairy too exists.
​
I understand that the thrill of powder skiing is not shared by everyone, and during my visits to Steamboat, I haven't been confronted with the family man on a ski vacation's version of Hobson's choice --- abandoning wife and small children for a day communing with a blizzard. Who is to say that skiing with your kids down the Why Not cat track or watching them negotiate the baby bumps on Rainbow is not just as thrilling? It's just different, that's all.

A sunny day draws skiers like lemmings to the high speed quad lifts off Sunshine Peak. But the terrain there is wide open, iand there is room enough for everyone. Trails sweep in an easy fall line down the mountain, offering an intermediate's version of nirvana. When my oldest daughter Eve, now 10, was a baby, she'd spend hours on my back as we cruised our way down High Noon. For my 6 year old Morgan, who accompanied me to Steamboat last year, the Sunshine lift line offered a confidence building opportunity after morning ski school classes to work on her beginning parallel turns .
​
The best advanced skiing takes place at the heart of the Storm Peak Express trail system --- the chutes off the 10,000 plus Storm Peak summit and the bump runs off of the Four Points chairlift. The Chutes and Flying Zee have been cut just above Buddy's Run, a classic, winding trail named after Buddy Werner, a young Olympian from Steamboat who died in 1964. Their steep glades are the first place to head after a heavy snowfall. Twister, Hurricane, and White Out offer concentrated steepness and plenty of bumpsCnot the sort of runs you want to be seen on unless your under twenty-five with knees and a back of iron. For the rest of us, Rainbow beckons. 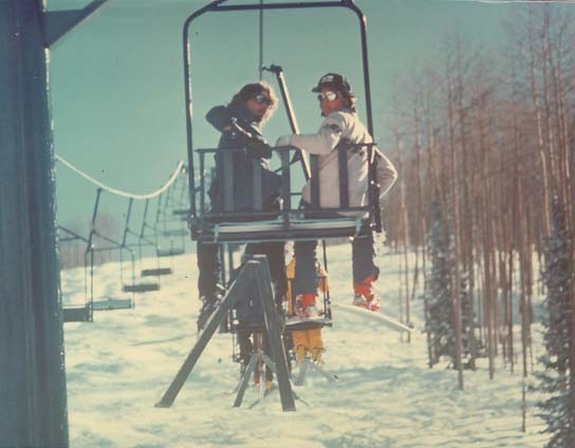 Most trails for beginners and early intermediates are located on the bottom half of the mountain. There are plenty of options from which to choose from the basic traditional slopes just above the Gondola base, to the easy, winding, and scenic cat tracks cut to enable the youngest, {or oldest} of beginners to crow that they skied all the way down from the top of the 8 person 'Silver Bullet' gondola. Rough Riders was easily Morgan's favorite run. It had all of the ingredients that kids her age find exciting. There were well-spaced trees to speed through and a really fun poma lift with wood cut out characters that waved to her on the ride up. For my kindergardener, skiing just doesn't get any better than this.

During our last visit, Morgan was a regular at ski school, sometimes for an entire day. She is very adaptable, so I wasn't surprised that she was able to take full advantage of the small teacher to student ratios that Steamboat's ski school insists upon. During our week at the mountain she progressed seamlessly to beginning parallel turns on the easy intermediate runs off Sunshine Peak. On more challenging slopes, like Vagabond, she put her iron man snowplow into gear, and skied both happy and under control.
On more than one occasion I spent time observing Morgan's class as they skied. I was gratified to see that instructors made sure that none of the kids was pushed beyond their ability. Halfway through the lesson, they headed for the tepee on Why Not, and downed some cookies.
​
Keeping a group of six to ten pint size skiers, warm, content, and up on their skis is no easy task. I am forever impressed by the skill, patience, and enthusiasm exhibited by instructors of young children. I could see that Morgan's instructors were expert in not just the mechanics of skiing. They imparted the most important lesson of all, especially for young children -- skiing can be fun.

"Sliding through the waist deep, virgin powder that filled birch glades of the Steamboat's Shadows trail, I was mindful of only the whooshing of nearby skiers who, like me, were deep into ski heaven" 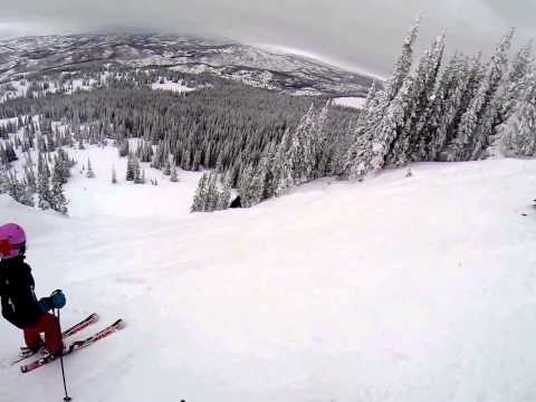 Even when the sun shines, a vacation regimen restricted to downhill skiing can wear out even the most dedicated skier. Steamboat has the advantage of being a real town. I've spent many an afternoon window shopping along the town's wide sidewalks, taking in a movie, or eating ice cream and chocolate. There is a great used clothing and furniture store, Fair Exchange, just off Lincoln Avenue, where I've found outfits for the kids at reasonable prices. FM Light and Sons sports a wide collection of Western hats and boots, and outdoor wear for real and ersatz cowboys. A little further down the street is Steamboat's namesake, a hot mineral spring which sounded to French fur trappers like the chug chug of a paddle wheel steamer.

Visitors to Steamboat can move around quite easily without a car. There is an efficient, free bus service running between town, the local Safeway, and the mountain area, where a series of shuttle buses connects with resort condominiums and hotels.
Those so inclined need not even visit town. The resort complex offers a variety of shops and good restaurants. Of the latter, I am partial to Hazie's located at the top of the Gondola, which opens in early evening to accommodate restaurant patrons. Complementing the food is the expansive, moonlit view of the entire Yampa Valley. For more adventurous souls in search of mountaintop gourmet dining, Ragnar's will take you to dinner at the mountain restaurant ast the rendezvous Saddle on snowcat-drawn sleigh departing from the top of the gondola.

Morgan and I stayed closer to sea level for our sleigh ride dinner. A horse drawn sleigh, complete with heavy blankets and a tale telling driver brought a group of us to the All Seasons Ranch. Two heavy draft horses took us on a twenty minute ride through the Yampa Valley high country. Morgan was thrilled when she was allowed to take the reigns and drive us to our destination. Along the way, we saw some elk, and lots of tracks in the snow. Coyotes we were told. My eyes are always drawn to the stars, which, in the crisp clean air of a Colorado evening, hardly ever disappoint.
DinnerCsteak or fish, potatoes, a vegetableCand all the hot chocolate and cider you can drink, is served family-style in a large canvas tent, heated by a wood stove. Most of those attending were families, but there were a few couples, huddled by themselves close to the fire. A guitar-picking cowboy leads those assembled in song.

As I was writing this story I asked Morgan to name her most memorable Steamboat experience. Without any hesitation she said: "At those hot springs with all those pools made out of rocks."

The hot springs at Strawberry Park are a perennial favorite. A four wheel drive bus picks up patrons for the half hour ride from Steamboat out to the springs. The site still retains a rustic ambiance, which is fitting because the springs are out in the middle of nowhere. There is a tepee for changing and an outhouse. Food and drinks are carried in ... and out by patrons. The springs occur naturally. The water can still be seen bubbling out of the ground, just above one of the two large pools that have been constructed out of nearby rocks. One is slightly hotter [104 degrees F vs 102 degrees] than the other. A third is filled with frigid, heart-arresting mountain water. Of course there's also plenty of snow to jump into.

After a hard day's skiing, there is nothing to match an outdoor swim in the mildly sulphurous hot spring... and nothing quite so invigorating as the subsequent plunge into ice cold water. Children are welcome during daylight hours. Evenings, and the extraordinary heavens, are reserved for those old enough to take off their clothes without blushing.

Morgan was not thrilled about leaving, and not just because she had to change in the unheated tepee. The body stays surprisingly warm during the time it takes to leap out of the pools into warm, if slightly damp clothing. Whatever chill lingers is quickly extinguished in the well-heated bus, which carefully makes its way down the snowpacked road and back to town.