First of all, a disclaimer.

I have been putting off for years the increasingly insistent demands of my kids to visit the theme parks in Orlando. They wanted the rides at Universal and Disney World. I feared the crowds. They wanted to get splashed by Shamu the whale at Sea World. I dreaded the summer heat and humidity. They wanted dolphins, Spider Man, Barney, and Body Wars. I wanted some quiet beach time or a hike in the mountains.

I lost.
​
But with a little creative thinking, a little added expense, and a spirit of cooperation, I survived the everpresent entertainment gauntlet on offer in metro Orlando, and I must admit, had more than my share of fun. And the kids. Well what kid ever had less than a grand time at an amusement park?

Our visit to coincided with the Spring-Easter vacation, which this year began during the last week of March. Friends who vacationed during the dog days of August warned us to avoid a summer visit at all costs, as do all the books touting the best strategies to maximize fun and minimize wait time at area attractions. Officials at the attractions themselves say that the best time to visit is late September through early November --the weather is still warm, the kids have gone back to school, and summer vacationers are back at work.

Long gone are the days when a trip to Orlando meant a visit to Disney World. The metro Orlando area is chock full of ways to spend money having fun. A family that arrives without a basic game plan risks being overwhelmed by the parks and attraction competing for your attention.

In the course of dinner table conversations over the winter, we decided to spend a couple of days at Universal Studios, including a visit to the soft opening of Universal's new theme park, Islands of Adventure, and one day each at Sea World and Epcot.
​
The highlight of my visit, which included 2 days at Universal Studios, and a day each at Sea World and Epcot, was a nighttime performance of the Cirque de Soleil, a Canadian company that has long wowed American audiences. A circus with no animals, a stage with a ringmaster out of a postmodern novel, the Cirque de Soliel was a riveting and uplifting experience. The company performs in the Washington area every year around Christmas, but the Orlando stage [along with another company in Las Vegas] is their American home, and it has been customized to accommodate a wonderful proliferation of acts -- from a high wire trapeze to a cyclist who gives new meaning to the word balance.

The cost of admission is not cheap, but who goes on such a trip to save money! Our family of five-- including our four year old Joshua, sat mesmerized throughout the entire performance. It is entertainment well worth the price.

My two daughters, Morgan aged 9 and Eve 13, were not opposed to enjoying such a performance, but they had come to Florida to get scared out of their wits as they defied the laws of gravity...and to pet dolphins.
​
We thought that we would ease into the ambiance of life at amusement parks by starting at Epcot. Epcot is Disney's attempt, assisted by major corporations like AT+T and United technologies, at info-tainment. Most of the exhibits have more of the feel of a world's fair, where the intent is to educate as well as entertain -- than an amusement park, which may account for the fact that fewer people seemed to be visiting here than the other parks we visited. Nevertheless, at Epcot the high tech entertainment that now competes with the latest in roller coaster technology for the attentions of today's amusement adventurers is well represented.

Honey I shrunk the audience is first in this category. Kids and adults alike enjoy The Living Seas attraction, with its signature enclosed walkway through a shark environment. My wife and kids were impressed with Cranium Command. There's lots of stand up comedy for adults and adventure for the kids. The Test Track, however, built by GM, was a letdown for my thirteen year old, who was expecting a far longer and faster ride.

After a relaxed tour around Epcot, we hopped aboard the famed Disney monorail for the short ride to Disney's Magic Kingdom--the grand dame of Orlando's amusement empire.

As any traveler knows, at some point during the day you reach a point of diminishing returns, when the desire to see just one more museum or historic site runs up against physical and cognitive overload. The key is to discover that this point has been reached before you commit yourself to that next stop.

Well, we had reached that point before we arrived at Magic Kingdom, but we didn't know it....and the Magic Kingdom pushed us over the edge.

The sheer number of people there simply overwhelmed the "magic." It was like being forever part of the crowd leaving a baseball stadium at the end of a game. We unanimously abandoned any thought of waiting in line for the rides. Just walking down main street was a chore. We stole a quick "Chevy Chase-like" look and headed back to our hotel for an afternoon swim.
There are accommodations for every budget and taste in Orlando, most of which can most economically be assembled as part of package, including admission tickets to area attractions.
​
We stayed at two properties of the Summerfield Suites Hotel chain --which feature kitchen facilities and bedrooms with a common sitting room. Our two bedroom suite on Lake Buena Vista was just around the corner from Disney, and it was where we retreated after our day at Epcot. The pool proved to be an afternoon favorite with my kids.
We ordered Italian take out for dinner [Dirosa's tel 3969340] , delivered right to our table in the hotel's sky-lit inner courtyard. Dining outdoors in relative privacy was a welcome antidote to our busy day. 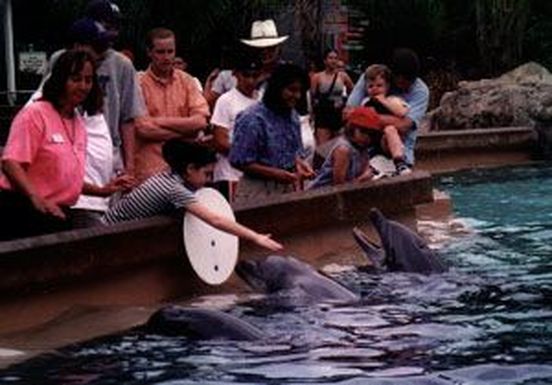 Morgan checking out dolphins
My daughters had one objective at Sea World -- to interact with dolphins. Well they managed that . . . and more. Sea World offers a number of specialized programs--from an 8 hour "trainer for a day" program [at $349 per person] to behind the scenes tours of Sea World's renowned animal rescue facility [$5 for adults, $4 for children]. The proliferation of these more educational programs at Sea World are a response to the growing interest and knowledge of today's kids in environmental issues. Our behind the scenes tour, for example, introduced us at first hand to the graceful manatee, and to the extraordinary measures that must be taken in order to assure their survival in an environment dominated by humans. Our kids were attentive students to the informed presentation offered by our guide, and offered an insight into the great potential that exists when education is intelligently combined with entertainment.

Less impressive were the dolphin and Shamu shows. Like much of Orlando entertainment, these were pure kitch, and far less enjoyable than other efforts, in particular the presentation at the outdoor aquarium in Vancouver, Canada.
For our visit to Universal Studios, we move a few miles to The Peabody Orlando, a high rise hotel opposite the Orlando Convention Center. The pool and expansive outdoor hot tub --- itself as big as some hotel pools I've seen -- were most welcome highlights. After a hard day's fun, I retired to the empty pool, lit only by the moon. An hour later, still alone, I hit the hot tub, savoring the solitude.

Universal Studios is the Avis of Orlando's entertainment universe --a perennial Number Two to the Disney machine. Yet a two day visit to Universal including a thoroughly enjoyable day at the just opened Islands of Adventure, offered convincing proof that it is possible to visit Orlando and skip Disney altogether, and not miss having done so. This is not only my view but it is shared by my kids.

After valet parking [a steal at $12 day, a premium of only $5] we went to pick up our admission tickets at the main gate nearby. We were greeted by lines at least 30 minutes long ... just to gain entry! Park officials marvel at the fact that despite their constant advice to purchase tickets ahead of time --they are available through most local hotels -- throngs of visitors choose to ignore their counsel. 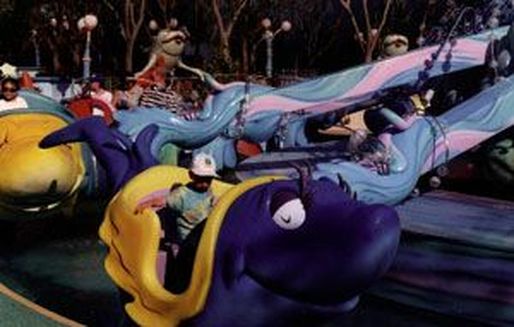 Joshua in Cat in the Hat Land
I had arranged a treat -- preferred access to the park's rides. For For around $400 per family, universal takes groups of 15 or so on a six hour tour of the park, gaining quick access to a full range of attractions. I admit it's not very democratic -- paying to cut to the front of the pack -- but I will do almost anything to stay out of lines.

Not only the rich avail themselves of this perk, which can transform the park experience into a steady diet of entertainment rather than a lot of waiting punctuated by short spurts of fun. We were joined by families, like ours, with small children. One father noted that they were regular visitors to Orlando, and considered the extra money spent on the guided tour very well spent.
​
The Barney show was the favorite of Joshua, my four year old, but he also professed to enjoy the high decibel performance of Twister, and the simulated journey on ET. My favorites were Back to the Future and The Fantastic World of Hanna Barberra. Both are high tech simulated rides, using what is now second generation combination of sound, visuals, and movement to create the illusion of super fast travel. Lots of fun, especially when you can go to the head of the line.

What goes up must come down
Imagine dying and going to amusement park heaven. You enter a shiny new facility, with lots of amazing rides and attractions, on a sunny but not too hot day, with only your family and a few other fortunates for company. The rides, all of them, are yours for the asking. You can ride the Incredible Hulk Coaster, or careen through the simulated mayhem of the 3D Amazing Adventures of Spiderman, as many times as you want. If you're 4 or 44, you can ride through the pages of Dr. Suess's Cat in the Hat five or six times before going off to play in the If I Ran the Zoo play area.

Such was our day at Universal Studios' Islands of Adventure, which had just come online for a small number of visitors before the official opening in the summer of 1999. When the park is up and running, there will no doubt be countless more visitors. Spider Man and the Battling Dragons are destined to be favorites, and what is there about Dr. Seuss not to like?