Ski vacations in New England are a world apart from their cousins in the West.

​The snow is, well ... different; the weather more brisk; the mountains smaller and more intimate; the ambiance defined by families.
​
The originators of skiing in New Hampshire and Vermont were often Austrians, who from the 1920s set out to recreate a bit of their native land in New England hamlets like North Conway, New Hampshire. Ski runs were carved out of tree-filled mountain slopes, snow chalets were built in the image of their European forbearers, and ski instruction proceeded in a decidedly Prussian manner.

As a child my fondest wish was to learn how to "wedel" [pronounced vedle] -- hurdling straight down the mountain with skis so close together I could hold a piece of paper between my ski boots. Today, when I ski into this time warp, instructors, even one in Innsbruck, chuckle at my old fashioned style.

Well, sometimes old fashion is good, and that is one of the reasons I continue to ski in New Hampshire. As a child I spent almost every winter weekend skiing in the White Mountains -- at Mt. Cranmore in North Conway, at Black Mountain in nearby storybook village of Jackson, and at Wildcat, just a little further north, in the shadow of Mount Washington, the highest peak in the eastern United States.

As a kid, these places were my home away from home. They are small enough so that I could ski anywhere -- alone or with friends -- without becoming lost or trapped by bad weather. And when the terrain became less of a challenge as I improved, the ice and the weather remained to taunt me, and forced me to sharpen my technical skills.

As an adult and a father of three young children these advantages continue to draw me to New Hampshire. First I enjoy the small town, "White Christmas" kind of atmosphere. Even in North Conway, which has been transformed from quaint village to outlet shopping mecca [there is no sales tax in New Hampshire], it is still possible to discover the heart of its village origins. In nearby Jackson, you can still find a place at the Wildcat Tavern, sipping hot buttered rum or steaming apple cider. 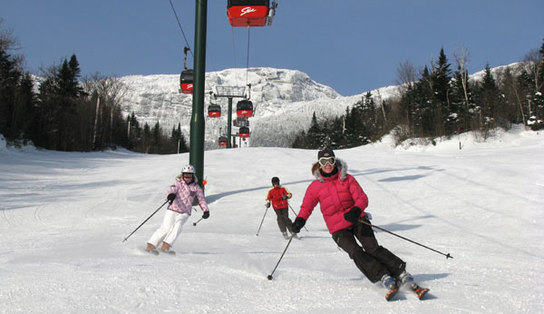 Cranmore mountain itself has undergone its own modernization. The famous "skimobile" -- a series of little cars that carried sitting passengers at a very leisurely pace up to the 1700 foot summit -- has, alas been dismantled. New chairlifts have been added, trails widened, and slopes groomed with the novice to intermediate in mind. Skiers can follow the sun by starting the day on the East Slope and moving over to the North and South slopes [which sit side by side!] as the day progresses.

Cranmore, originally owned by a family of Austrian expatriates, has recently been purchased by LBO Enterprises, which owns Attitash mountain, about one half hour's drive north of Cranmore. I must admit that I haven't skied at Attitash, which was said to want for sunshine. Now however ski tickets are interchangeable between Cranmore and Attitash, offering the option to check out both resorts.
​
Wildcat Mountain, like state-owned Cannon Mountain which sits on the other side of Mount Washington, has a deserved reputation as a New England skier's paradise. That is, there is plenty of bone-chilling, frostbite-friendly weather, gusty winds, and steep terrain flavored by New Hampshire's most famous ski export -- black "boilerplate" ice.
Wildcat is a great place to ski -- really it is. As a kid, skiing at Wildcat was a rite of passage to New England style- expert skiing. The cold and the wind have their own exhilarating attraction, even for intermediates winding their way down the Polecat trail from the 4,100 foot summit. And when the sun shines the views of Mount Washington across the road are spectacular. From the gondola, you can plan your spring descent down Mt. Washington's Tuckerman's Ravine, which opens to ski toting hikers about the time the ski lifts close.
I recently asked my two daughters, Eve aged 10 and Morgan, aged 6, if they remebered Bretton Woods, a small family ski mountain in Twin Mountain, 18 miles north of Bartlett.

"I love that place," exclaimed Morgan.
​
"I missed getting a silver medal by one second," lamented Eve with a sigh.
​
Considering we last visited Bretton Woods during Christmas 1992, many ski moons ago, their vivid memories attest to Bretton Woods' attraction. 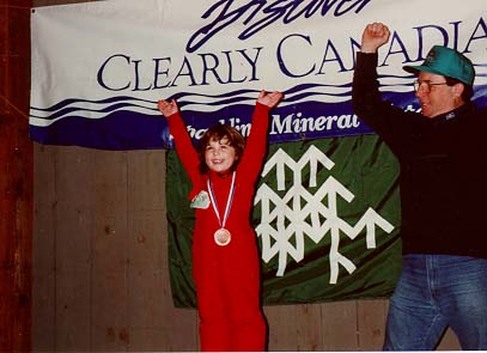 In many respects time has passed by Bretton Woods. It is not a resort -- the famed hotel complex by the same name is closed for the winter -- simply a ski location just off Route 302. Skiers come for the day or stay in one of a number of small motels and bed and breakfasts in Bartlett or Twin Mountain. The base lodge is modern but utilitarian, welcome to box lunches brought from home.

The skiing is just right for beginning and intermediates skiers. There isn't much variety, but that didn't seem to bother Eve, who spent a couple of days in ski school, or Morgan, who, at the ripe old age of 3, put on skis for the first time.

The pace at Bretton Woods is slow. Morgan might have learned more elsewhere, but her first experience on skis was fun -- the most important achievement for any ski school.
​
The facility housing Bretton Woods' ski school remains the best I have seen in all my travels. It offers parents a one stop shop -- skis and boots can be rented and kids placed in ski school under one roof. At the end of the day equipment can be checked on site, making transporting family and gear far less complicated.
​
As anyone who has tried to get their kids to ski school on time knows, even under the best of conditions, family ski vacations require the logistical skills of an army quartermaster. Anything that simplifies this process is a blessing.