This article was originally published by the Washington Post
Next time you're thinking to take some time off, consider a vacation with your kid.

Vacations like the one I took last winter with my daughter Eve offer a chance for fathers to revel in this most loving of relationships and to strengthen the bonds strained by life in the workaday world.

The four day trip to Colorado's Copper Mountain was supposed to have been my annual 'guy ski vacation'. The holiday that my college buddy Chuck and I had taken one year earlier at Steamboat Springs had convinced us of the need for an annual pilgrimage to the slopes sans famille. We promised each other that nothing would prevent a return engagement.

Well I kept my part of the bargain. But Chuck, only weeks before our scheduled departure, called to cancel. Something about the new baby driving his wife crazy.
​
I wasn't hearing any of his sheepish excuses, whatever their merit. How could I have my guy vacation, I brooded, without the guys?

I couldn't. But I quickly found another willing traveling and skiing companion -- my five year old daughter Eve. Skipping a couple of days of kindergarten was no problem. And my wife didn't know whether to laugh or cry at her sudden good fortune.
​
Aside from stolen afternoons and one night together in a tent in our backyard, Eve and I hadn't spent much time together, just the two of us, since the birth of her sister almost two years earlier. Just having time alone with her has always been wonderful and gratifying. I thought that our own little ski adventure, doing something we both loved in a faraway place, would be a great experience for us. I certainly wouldn't have the same vacation I had planned...just different in a better sort of way.

Eve is a veteran air traveler but, as with any young child, it's best to plan arrivals and departures to suit their schedules. Because I had already purchased a ticket, however, we were forced to take my late afternoon flight out of Dulles, which after the expected delays didn't get us to Denver's Stapleton airport until 6pm mountain time -- bedtime on Eve's clock. For some reason we missed the shuttle bus to Copper.

Eve was a trooper, running with luggage carts and anxiously waiting for the next stage in her adventure to begin. Her presence made my wait for the next bus far less tiresome than had I been alone. Playing with Eve, I could almost forget that we were stuck in an airport.

When I was learning to ski at New Hampshire's Mt. Cranmore twenty-five years ago, the sight of a four or five year old on the slopes was something to marvel at. Today, these little demons, schussing their way along beginner and some intermediate runs are on ubiquitous display.

Copper, like most resorts, has full day ski programs for kids four to six and seven through twelve. Within each grouping, classes are divided by age and ability. For outright beginners, the `Mitey Mite' rope tow is just a few steps away from the indoor facilities, where pre and post lesson games are played and lunch is taken. Eve, for whom a chairlift ride is no longer a source of excitement, raved about her warm up rides up the rope tow.

Kids are initially divided according to their abilities as described by parents upon arrival at the ski school in the basement of the mountain side lodge, and then once again after a more objective slope-side appraisal by ski instructors.
Eve does a pretty mean snowplow and wedge turn, so she was placed in a class that skied on the beginner trails off of the Union Creek chairlifts. 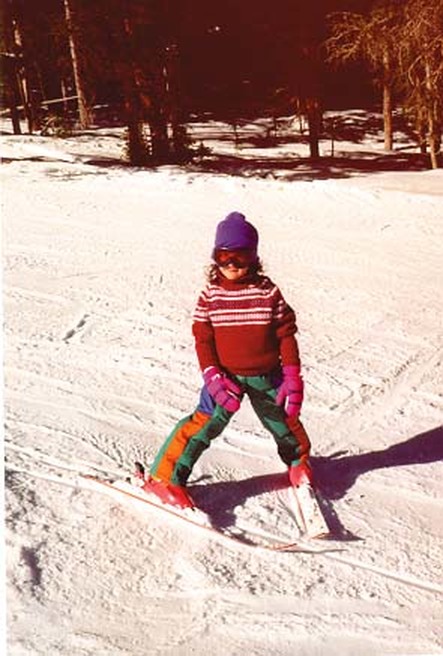 Although she's been going to ski school since the age of three, Eve still insists upon negotiating each step of the entire process -- from choosing her ski attire to the length of her stay in ski school. For me this was the most maddening, frustrating part of our trip, all the more so because I was alone, and obviously overmatched by my daughter's bargaining skills. Eve knew that, in the end, I'd promise almost anything to get her out of the condo and into class by 9am -- a different hat or pair of gloves, one less sweater, and an army of chocolate kisses for snacking on the slopes.

Every morning we'd do this dance. Both of us knew that she wanted to go skiing. It was just a question of the "price" I'd have to pay.
​
While this haggling is not at all atypical for young kids [is it??], parents shouldn't underestimate the trauma of a new ski school for a young child. We drag our kids away from a familiar and reassuring home setting and drop them on frigid, wintery days into an entirely new social situation, with new kids and teachers -- and expect them to have fun. That most of them do is a testament to the care prodded by dedicated staff and the sheer pleasure of the sport itself.

The ski school at Copper is staffed in large part by a large contingent of Aussies, who follow the snow from continent to continent, and in so doing manage to ski almost twelve months of the year. After checking in at the ski school, and labelling all of Eve's ski acessories, one of them swooped her into the small but adequate room that serves as the ski school's playroom, rest area, and dining facility. She was given a cubby hole for goggles, sunglasses and ski boots and invited to join in a pre-ski game of bowling.
​
Eve lingered, tugging meekly at my arm. I, the same guy who only twenty minutes earlier had earned her undying wrath for suggesting that she wear a sweater, had suddenly become the most important person in the world. Would I come back to have lunch with her at the ski school, she asked. I jumped at the invitation.

I arrived at the ski school before the noon break and was directed to a shuttle bus stop 50 yards away. Soon thereafter a bus pulled up, and out spilled Eve's class, trying their best to keep skis from tumbling out of control.

There is no easy access from the main base area to the beginner trails used by the ski school for skiers of Eve's ability. This was a source of complaint by Eve, who along with her classmates, had to drag her ski equipment to and from the shuttle on both ends of the short bus ride.

Aside from this inconvenience, ski school proved both fun and instructive. Because we were skiing during the low season, class sizes were small and lift lines nonexistent. Today almost one year later, Eve remembers her ski instructor Nancy and the wedge turns they practiced over and over as the class snaked its way down Roundabout, Fairway, and Prospector.

Eve and I stayed in a one bedroom loft condominium a five minute walk from the base lodge. I never did see the loft bedroom because Eve insisted that we share the living room's Murphy bed, within easy reach of the television and the refrigerator.

We proved to be great roommates, Eve and I. Apres ski consisted of some great television oldies on Nickelodeon followed by an early dinner prepared with Eve, and lots of ice cream. In the evenings we'd read stories by the fire or Eve would color while I sneaked a glance at CNN. On our second night Eve woke me at 4am, buried herself in my arms, and watched Bewitched for a while before nodding off to sleep. I never enjoyed Darrell and Samantha more than I did that night.

The lodge had the biggest hot tub I've ever seen. It was more like a small swimming pool. Eve is usually not permitted to use such facilities, but there was no pool, the water wasn't too hot, and we were, after all, on vacation.

"Ski school proved both fun and instructive. Because we were skiing during the low season, class sizes were small and lift lines nonexistent"

Our holiday evolved the following pattern: In the mornings Eve would go to ski school and I would ski alone or with one of Copper's hospitality guides. Afternoons we'd ski together, riding the American Flyer, one of two fast quad chairlifts at the base lodge, or, when Eve was feeling less adventurous, skiing over to the Union Creek lifts.

I decided long ago never to attempt to instruct Eve in the finer points of skiing, and to leave the task to professionals with more patience and emotional distance.

Eve, however, like most kids her age, insists that skis are made to point in a straight line down the hill, and that turning is a bothersome chore reserved for ski school. So as we skied together I found myself admonishing her to stay with her wedge, slow down, and turn, until it dawned upon me that she wasn't so much forgetting to turn as she was unconvinced of its value.
​
Who was I to intrude upon her fun? We played games as we skied, spreading out our arms like airplanes, doing figure eights, and running mock[at least on my part] races. On the flats Eve liked for me to slow down so that she could coast under my legs. Most of these contests kept her speed under control and maximized her turning. But she was having so much fun that she didn't realize this.
And so was I. Not the kind of excitement I've experienced looking down from a 12,000 foot summit into a bowl of virgin powder, or cruising through the bumps after a heavy snowfall. But sharing a chairlift with Eve, skiing with her, sharing our love of the sport, and enjoying the satisfaction of my daughter's unfettered playfulness and glee has won a singular place in my ski heaven.