Xmas in Zermatt and Chamonix 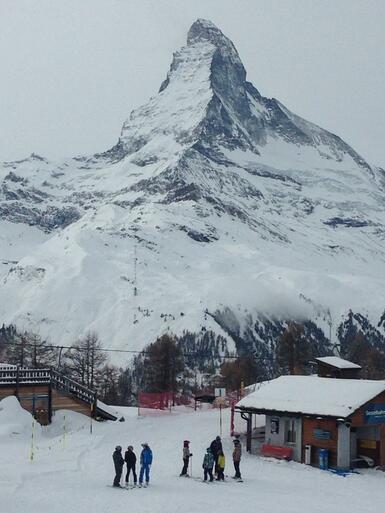 Many decades ago as an eighteen year old I traveled with my younger brother to Zermatt to do some summer skiing on the Plateau Rosa glacier. Every morning we would take the Gornergrat Bahn to a series of poma lifts that would spirit us to the sun-drenched glacier for a few hours of skiing, heading back before the lower slopes turned to slush.

Earlier this season I returned to Zermatt, sans brother but with my wife. We had scheduled a few days in the fabled Swiss village before a family christmas rendezvous in Chamonix.

Early season skiing in the Alps, like my home base in New England, can be challenging. Snow cover can be spotty and insufficient resulting in closed lifts and slopes. Early snows also tend to produce fast, crunchy and icy runs. Even rain cannot be excluded, as I can personally attest.

My three days in Zermatt however did not disappoint. There was plenty of snow, even the untracked remnants of a snowfall a few days before my arrival.

During my December visit the weather was mild. The sun was shining. The terrain was fast and uncrowded by the hordes that descend during Christmas. The view of the iconic Matterhorn and the surrounding range was clear and unobstructed. I had rolled the dice in planning a visit to Zermatt so early in the season ... and rolled a seven!
I was skiing alone, so my ventures off piste were limited – both by the snow conditions and common sense.  According to a French skier with whom I shared a chairlift ride, the law-abiding Swiss generally do not ski off the marked trails, refraining from even skiing on the wrong side of a trail marker, even if untracked powder beckons.

Rather than take the famed Gornergrat from the center of town opposite the railway station— a picturesque but longer (30 minutes) ride to the snow— I walked to the Sunnegga lift– a funicular that climbs via a tunnel cut through the granite mountain. On busy days I could see how the wait for the lifts that spirit skiers to the skiing terrain could stretch, but I breezed through without any wait whatsoever. A word of caution. Europeans are more tolerant of a lift system for which ski-in ski-out is all but unknown, especially early in the season when skiable areas are often only accessible via cable car. The long walks and cable cars are dictated by geography,  but that is small comfort to fully kitted out skiers not used to carrying equipment enroute to the liftline or waiting in line both to reach the slopes in the morning and to return to town in the afternoon. I could not escape thinking how much work it would be to shepherd two or three young kids up the mountain. 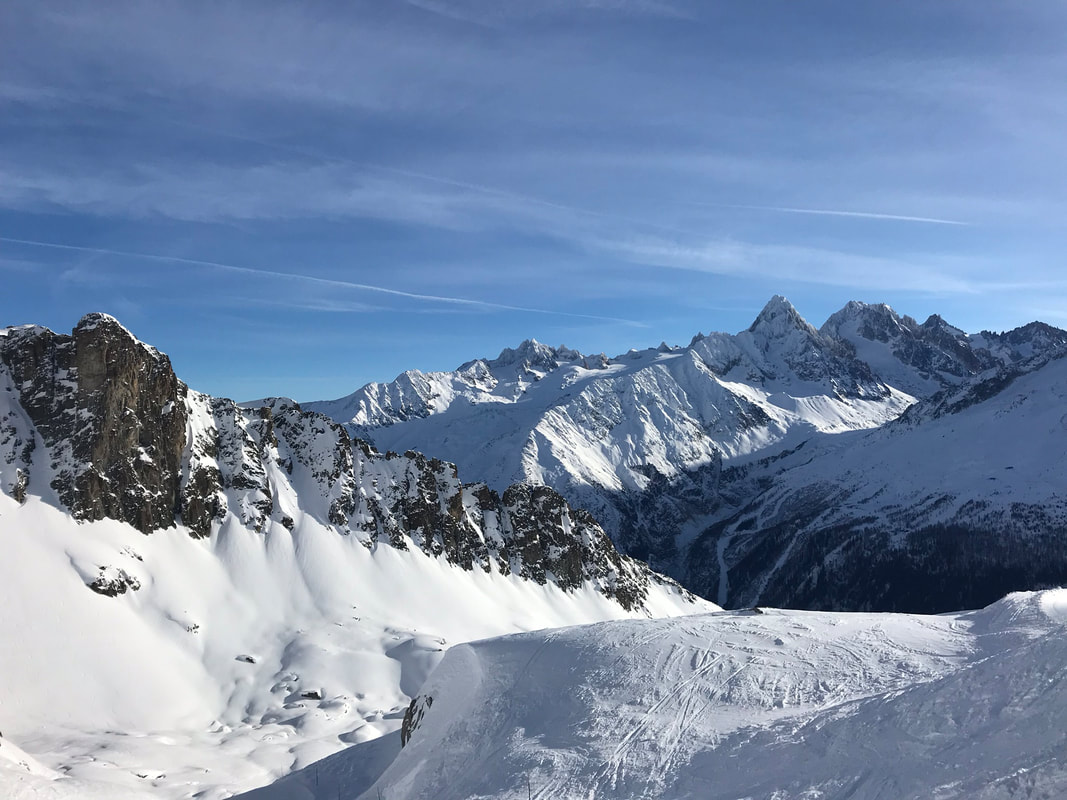 None of this matters however when you exit the Sunnegga tram and see the majestic Matterhorn in full and unobstructed view. Continuing up the nearby Rothorn gondola to 3000 meters (9000 feet) a variety of intermediate trails offer skiers unforgettable views and easily skiable on piste terrain. Snowshoers can exit the Sunnegga cable car and walk down to any number of nearby refuges for lunch. My wife was able to walk down to town in full view of the Matterhorn, and through evergreen forests below tree line, in about one hour without snowshoes from the Findein refuge along one of the many walking trails that are popular when the snow melts.

The chain of poma lifts that I rode to the Plateau Rosa glacier for summer skiing has been replaced by high speed lifts, including a brand new gondola, to the “Matterhorn Glacier Paradise.” Lunch at almost 4000 meters is available for non-skiers. These lifts were closed during my visit, probably because there were so few skiers on the mountain.

What would skiing be without après ski? Zermatt used to known for its traffic-free thoroughfares. Ubiquitous electric vehicles have replaced horses-drawn transport however, more practical but less picturesque.

In Zermatt the best part of my non-skiing day was spent at the bar of the Mont Cervin Palace, sipping a scotch and listening to Cole Porter tunes played by a versatile and engaging pianist. One night we even lingered for dinner so we could enjoy the second set.

Zermatt was the first stop on our ski itinerary. Chamonix was next on our travels, the main event where our kids, with wives and boyfriends in tow, would rendezvous for the Christmas holiday.

I had considered driving from Zermatt to Chamonix less than two hours distant but decided it would be more convenient and relaxing (rather than cheaper) to take the longer but far more scenic route by train. The route to Chamonix passed through Martigny and Vallorcine, took 4 hours, and required 4 train changes along the way. Nevertheless, the weather was glorious and the ride was spectacular. Even the train changes, with luggage and ski gear in tow, was easily managed.
The steep climb from the lowlands near Lake Geneva and over to the Chamonix valley was worth every penny of the ticket.

Chamonix is the major town along a long valley route that runs from  Martigny to Annecy. Each stop along the train route –Les Houches and Vallorcine for example -- has its own ski terrain and village, with accommodation and restaurants.

We stayed at Chamonix, the largest and busiest venue, but those in search of a smaller locale, without sacrificing ski options, can check out these smaller villages.

When the suns shines and the wind does not blow too sternly you can spend hours gazing out over the expanse. 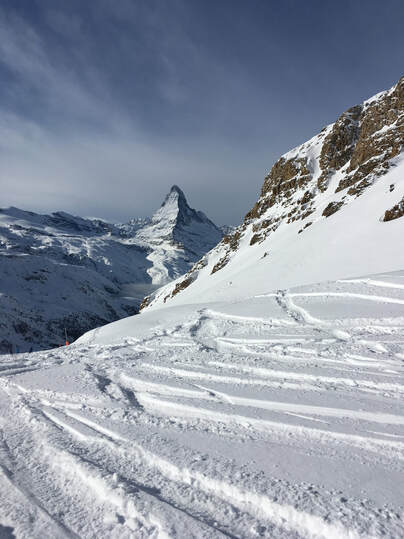 I did most of my skiing at Brèvant-Flegère.  On my first day I walked up the hill past the Tourism Bureau to the bottom of the PlanPraz-Brevant cable car depot. To be honest, It is not the best way to start a ski holiday. If you don't like walking all kitted out or have kids in tow, better to wait for the free bus, which traverses the entire valley resort system. After Christmas when the morning lift line exploded I chose to depart from Les Praz, a two minutes bus ride from Chamonix. We waited one half hour in the gondola line but it was the only liftline I experienced all week, and far less than the wait reported at Brevant ---one half hour to buy tickets and a similar wait in the gondola line.

There was no new snow during our Chamonix visit, making for fast cruising on both the intermediate and expert slopes.  Almost all runs are above tree line, creating an enticing expanse of on and off piste skiing.  The absence of new snow kept me on piste. Conditions reminded me of New England, minus the black ice and December rains.

The views however were in a class all by themselves, especially when the sun was shining, as it often did.  On those days I preferred to ski at the sun-facing Brèvant-Flègere rather than at Argentière, which is popular with families.

The terrain --- steep at times, fast, and during holiday season, hosting lots of skiers --  can be intimidating for intermediates and beginners. Many of the intermediate runs would easily be classed as expert in the US. Best to take a lesson or better yet hire a guide on that first morning to  introduce you to terrain that suits your skills if you are unsure of your abilities.

​We reserved one day for the ride to Aiguille du Midi, a spectacular outpost (3842m) within sight of the Mont Blanc summit nearby. The summit at almost 4,000 meters is a reference point viable throughout the valley and access is offered thanks to an extraordinary feat of alpine engineering. The Mont Blanc Unlimited pass provides easy access to the Aiguille du Midi and other non-ski activities around Chamonix, in addition to entrance to 10 ski areas across the region.  We wondered if the steep 65 euro all-inclusive ticket was worth the money, especially since we wouldn’t have time to do everything in a single day, but we were not disappointed. 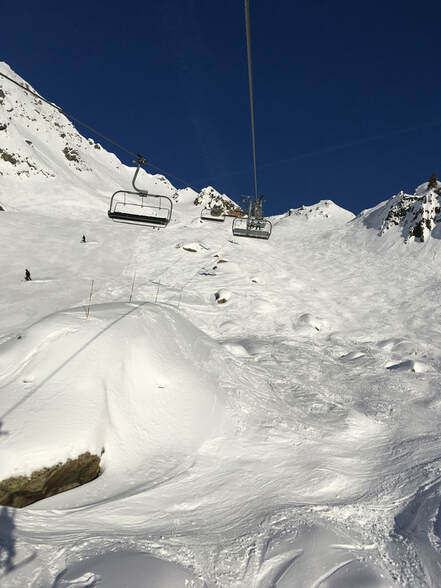 The view from the summit is spectacular. When the suns shines and the wind does not blow too sternly you can spend hours gazing out over the expanse. The retreat of glaciers, which not too long ago reached the village of Chamonix itself stands out among the wintery terrain. Skiers, some of them equipped with crampons, ropes, and ice picks, make their way down the steep incline to the gently sloping open snowfields, where they are all but swallowed up by the vast expanse.

After making the harrowing cablecar descent back to town, we hopped on the Montenvers train to see the Mer de Glace, France’s largest glacier, and the ice cave carved anew every year in a giant frozen, winding river of glacier water. Accessible by the quaint, yet crowded, rack and pinion railway, the ride offers lovely views of the valley for those less inclined to make the trip to Aiguille du Midi. While the train trip isn’t a must-do in itself, if you’re willing to tackle the 500 steps down to the ice cave it’s a great way to spend the afternoon.

Chamonix is well known for its après ski scene. There is plenty of window shopping along main street. During holiday season in particular there appear to be more non-skiers visiting than skiers with a decidedly non- spring break vibe. The spa at QC Therme– like everything a short walk from the town center -- proved to be particular hit with our family. As for me the après ski highlight was dinner at the Albert 1er, a Michelin two star that, like everything else during my visit, did not disappoint.