There's more to the Caribbean than Sun.

​I approached Virgin Gorda as Columbus did.... by sail. Anegada is the first landfall from the north, a barely perceptible island hardly higher than sea level, visible only because of the few palm trees that appear incongruously on the horizon. Some intrepid vacationers make their way to this isolated outpost, but our destination still lay ahead. Virgon Gorda - the "Fat Virgin" - so named Columbus himself - came into view after a seven day sail from Chesapeake Bay.

Virgin Gorda lays just beyond the Great Dog, one of a series of small uninhabited islands signaling the approaches to Virgin Gorda and the larger and better known Tortola, the most popular destination for visitors to the British Virgin Islands.
​
The stretch of ocean between the two - Sir Francis Drake Channel - is a sailor's dream - predictable fair seas and winds never out of sight of a welcoming anchorage. The flourish of sails belonging to the motley fleet of the bareboat charter trade offers proof the area's legendary attraction for generations of sailors. 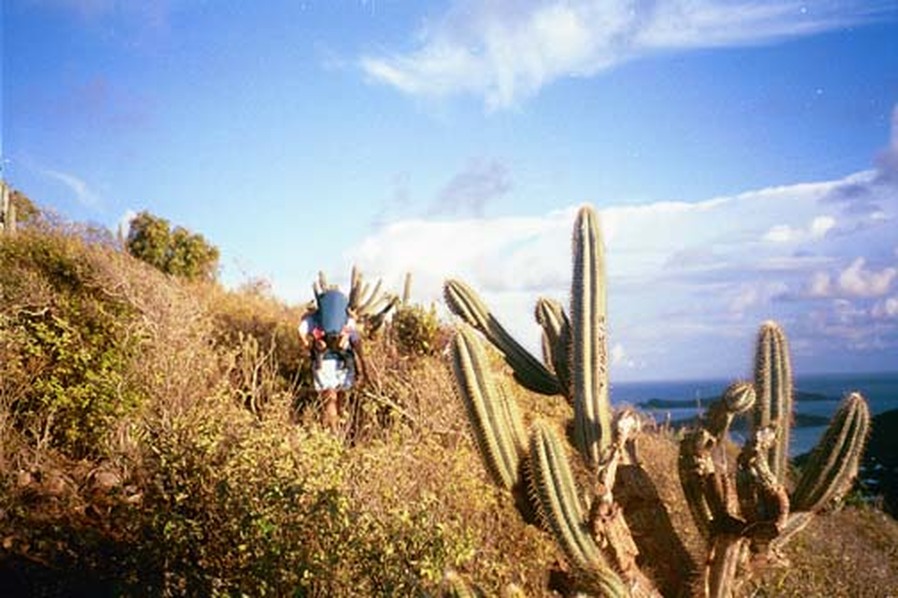 Hike above Berchers Bay
﻿​I had had enough of life on the sea, however and was anxious to meet up with my wife for a long postponed vacation par deux. Only a few hours after my arrival I greeted the ferry from the airport at Beef Island across the channel. However improbably, I recognized the only passenger on board. Our plan was actually working, as auspicious beginning to what we hoped would be 5 days of R and R in the Carribean sun.

We weren't disappointed.
​
I admit to a heathy skepticism about island vacationing. Something about flying half way around the world just to sit on a beach has never thrilled me. The closest I had come to the Carribean in my many years of traveling and writing was a short visit to Bermuda, and I stayed only long enough to locate the sailboat that would spirit me back to Annapolis.
Virgin Gorda however could not fail to impress. The island snakes in an east northeast direction, served by a single main road that runs along the island's axis from the yacht harbor in the south, passes the main inhabited area of stucco homes, and climbs spectacularly to Gorda Peak before descending along harrowing switchbacks to the North Sound and the town of Gun Creek, with its modest homes perched along a hillside.

The 1359 foot Gorda Peak is the capstone of the national park by the same name that dominates the interior of the central sector of the island. Hardscrabble vegetation and hordes of hermit crabs, which find their way into the most unlikely places, dominate the landscape. A perennial lack of fresh water restrained the island's development for centuries. The few thousands of islanders- "Belongers" in the local parlance - were, and largely remain poor. Where they once depended upon subsistence agriculture and goat herding, the locals today serve a small tourist trade and a tiny commercial sector. The ubiquitous goats, hardy animals that they are, along with the cute hermit crabs appear to be most successful in accommodating the island's topography.
​
The lack of water and the peculiarities of land ownership which has kept most of the island in the protective hands of the British government, have thankfully retarded development of the tourist industry, and the transformation of Virgin Gorda into a cookie cutter island retreat. The lack of a modern tourist infrastructure impresses itself during even the shortest visit to Spanish Town, the main and only retail district. Here a visitor can do laundry, buy some unremarkable gifts, get something simple to eat, and catch a ferry to Tortola and points beyond, but not much more.​

The view is glorious, the open air restaurant puts a premium on beach casual, and the food offered a welcome antidote to a morning in the sea.

Given the lack of tourist infrastructure, a rental car is a must. The Bath at Devils Bay at the south end of the island boast some extraordinary rock formations that eons ago tumbled into the sea. The site is a favorite of boaters, who vie for coveted anchorages off the beach. Kids and adults alike can spend hours following a watery path through the maze. The beach at Devil's Bay is more sedate than the one where the Bath's begin at Spring Bay.

After a couple of hours in the sun, it's time for that most appropriate of Carribean endeavors - the long lunch overlooking the sea. The Top of the Baths restaurant was in all respects one of the high points of the island. The view is glorious, the open air restaurant puts a premium on beach casual, and the food offered a welcome antidote to a morning in the sea.
​
The island offers a range of accommodations- from famous getaway resorts like Little Dix, a retreat that has for decades catered to discerning travelers with means, to one off houses and pensions. 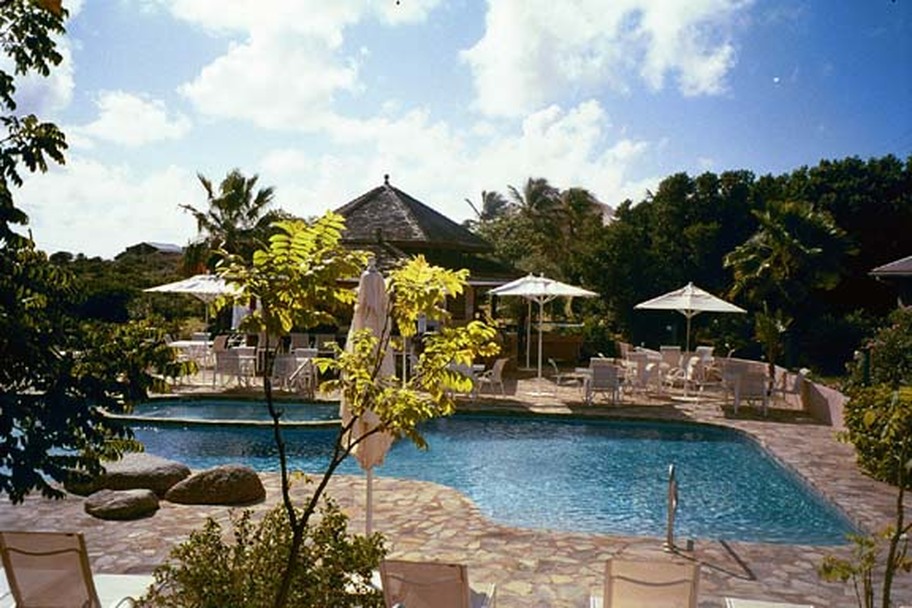 Old Yard Inn pool
The Olde Yard Inn and Health Club is somewhere in the middle. Located in a walled compound on th high ground a few minute's drive from Spanish Town harbor, the most memorable aspect of the property is a wonderful open air library built in the restrained elegant style favored by British colonialists. The books and the piano suffer from the ever present humidity, but this authentic relic of the island's history is itself worth a stay at the Inn and a couple of hours with an old book.
​
Biras Creek, where we spent our last days on Virgin Gorda, well deserves its reputation as one of the best resorts in the world. The 140 acre property offers the kind of understated refinement and pristine outdoor activities that could charm and relax the most jaundiced of travelers.

A boat ferries guests to the resort from Gun Creek. Guests are assigned bicycles for getting around the property, which is just as easily accessible by foot. The small number [33] of suites and their traditional understatement quickly establish an atmosphere of intimacy and quiet discrimination that have attracted guests to Biras Creek since the late 1970s. Children are more visible in summer, but even then, they must be at least eight years old. I spent an early morning hiking along the ridge overlooking the resort with the co-managers and their two pre-school kids, and I was glad for their company and enthusiasm. Kids are sure to like an adventure walk along the treacherous waters of Berchers Bay where the rotting skeleton of at least one shipwreck litters the shore. Just don't tell the kids that drugs were the smuggled cargo.
​