Hot Times in the Holyland.

"A tourist arriving in his hotel room finds a bowl of fruit with a greeting card from the manager," wrote on Israeli journalist recently. "A tourist arriving in his room in Hong Kong finds Chinese fortune cookies. A tourist entering his room in Tel Aviv," he continued, "finds a gas mask with instructions attached."
​
These words were written at the height of the recent war scare with Iraq, but they say something important about travel anytime to Israel -- Israel is a vacation destination quite different from almost anywhere else American tourists are likely to venture. If you're looking for a real vacation, find some quiet beach in the Caribbean or Greece. But if you're drawn to Israel, and the Middle East generally, and Israel's unsurpassed attractions are part of America's cultural and religious heritage, remember that you may well have difficulty insulating yourself from the tensions, and even the violence that curse the region.

I am a frequent visitor to Israel and the Middle East, and after much planning, I had arranged for my entire family-- my wife, daughters aged 12 and 8, and my 3 year old son-- to travel with me to Jerusalem for the month of August. 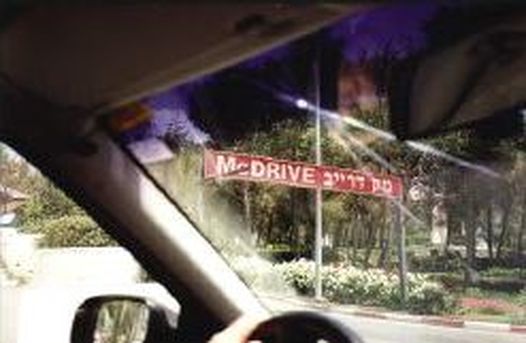 ​We first flew to London on a British Airways flight from BWI., spending a couple of days in and around the city before continuing on to Tel Aviv.

I didn't intend to take the family on the traditional bus tour of the Holyland -- the option favored by many travelers to an unknown destination. I had no desire to see "everything" and was certain that my kids had no such objective. We never did make it to Tel Aviv or Jaffa, and swam only once in the Mediterranean. I know the country fairly well and was confident of my ability to drive anywhere [except the choked streets of Tel Aviv!].  My kids [not to mention my wife and I] would rebel at the idea of dusk to dawn treks to archeological ruins and visits to churches, museums, and war memorials that justifiably attract thousands to the Jewish state. We were going to live in Jerusalem, explore the city at our leisure, and travel to a few select locations as the spirit moved us.

Two friends had graciously offered their homes in Jerusalem to us while they traveled in the US. Any other option would have been unaffordable as well as undesirable. One of the houses was in East Jerusalem, the other in a wonderful Jerusalem village of Ein Kerem.

The house in East Jerusalem, a part of the city captured and annexed by Israel in 1967, offered my kids a not entirely hospitable welcome to the Holyland as well as an introduction to the relations between Israel and the Palestinians. Ever quick to make judgements, the two girls pronounced the place too dirty, dusty, and noisy with the blare of around the clock traffic.

We had to pass an Israeli military checkpoint to travel to the center of Jerusalem, or we could take the more circuitous route around the back of our house to town via the Mt. of Olives. Eve, my eldest, wondered what was the purpose of the roadblock if it could be so easily avoided. She was prompted to ask the same question after a similar adventure to the Palestinian town of Ramallah, just north of Jerusalem, where we went one night for dinner with friends. Just one of the many simple, direct questions for which there were no easy answers.
​
Our first days were spent walking around the famous Old City. We interspersed visits to the Wailing Wall and the two mosques on the nearby Haram as Sharif with trips to the souk [market], where friends took our orders for custom gold jewelry and we ate hummous and ful at the original site of the renowned Abu Shukri, now trended by the master's son.

﻿The kids were happier at our home in Ein Kerem, a beautiful spacious house with a panoramic view from the walled veranda. There was a community swimming pool nearby and they learned find their way to the wizened man who squeezed fresh orange juice at a stand in the village center.

Within a few days of our arrival a terrorist attack took place in Israel's Mahane Yehuda market. The attack, which killed and wounded many Israelis, put the entire country on edge, and created concerns among our children that remained with them for the duration of our visit.

The bombing made both girls, but particularly my younger daughter Morgan , aged 8, extra sensitive about all manner of dangers real and imagined. Coming from the crisp suburbs of Washington, they were shocked and saddened by the carnage, which one friend was able to relate to us first hand, and like most Israelis, were introduced to living with a constant sense of vulnerability that could not but interfere with the idea of a "vacation." 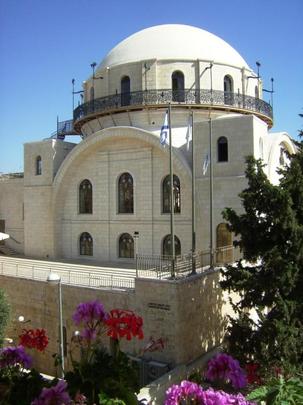 We spent most of one day at Sahne, a wonderful fresh water spring and swimming hole known to Israelis but rarely visited by tourists. Like most of the places we visited, it was a little on the dirty side -- the beaufiul green grass fouled by unleashed dogs. The kids enjoyed the water, and loved standing in the waterfall by the old mill, but could have done without the fish nibbling at our feet. I thought it ticklish.

The guest rooms at Kibbutz Beit Hashita offered us great value for money. Almost every kibbutz has branced into the guest house business. For less than $100, we enjoyed a well appointed room, breakfast, use of the kibbutz swimming pool, and a commanding view of the Gilboa mountain range. Not to mention the biggest pelican I have ever seen, along with assorted camels, monkeys, and ostriches at the rough kibbutz zoo. The kids spent an entire day at the pool having the kind of regular fun that one is supposed to have on vacation.

One needs a car to take advantage of these offers, which decrease in price the further one gets from the Israeli coast. For less than $30, we feasted at a restaurant in the nearby village of Nrarah. Located above a gas station, the restaurant serving Arabic food is a ten minute drive from the kibbutz.

Our trip up north brought us to the Israeli town of Metulla, with its gingerbread houses, and the nearby border with Lebanon. Christened the "Good Fence" the kids got a thrill by sticking their fingers, and attempting to thrust other body parts, through the fence into what [they thought] was Lebanon. We had the pool at the Arazim guest house in Metulla to ourselves., no doubt because of the muffled boom of artillery salvos within earshot. The night after we left, residents of Metulla [tourists included] slept in bomb shelters. 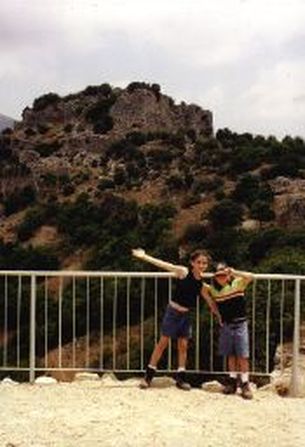 Nimrod Castle, or what remains of it, was the high point of our visit to the Golan Heights, a spectacular, volcanic plain wrested from Syria in 1967 The castle, built in the twelfth century, covers a wide expanse of hilltops over a quarter mile span. The kids enjoyed exploring the remnants of the fortress and, like detectives, hypothesizing about the purpose and style of the original structures.

​While Eve and I, with Josh on my back, went to explore the eastern end of the fortress, Dori and Morgan discovered their own link with the distant past -- a mancala gameboard carved out of a large rock. No doubt soldiers, or perhaps children, played at this site centuries ago, using stones gathered from the ground, just as we had done. It was a poignant example of our enduring connection to the past, perhaps the best lesson a visit to the Holyland can impart.

At the southern end of the Golan lie the hot sulphur springs of El Hamma. The medicinal waters were favored by the Romans, who left graceful archeological remains. Today, El hamma is a favorite of Israelis and especially Russian immigrants, who can be found in the baths from the early morning hours. We decided to spend an evening in the pools, after the heat of the summer day. The drive from Kibbutz Afik, where we stayed in another enjoyable guest house, was less than twenty minutes down a road that winded its way to the hot springs. The stars were shining brightly that night, offering a glorious panorama of the heavens above. What better vantage point to enjoy the still glorious wonders on offer in the Holyland.