Schussing at Stratton.
​
​For most of our snowless winter season, it takes an act of faith to set out on a ski trip, whether to slopes near or far. Three days of fine skiing on the uncrowded slopes of Vermont's Stratton Mountain, however, affirmed the maxim --Don't trust your eyes, or the weather reports, and bless the wonders of modern snow making.Skiing in New England can be a risky proposition. But I thought that, since I would be traveling north with my wife and three kids on family business anyway, I would take the chance and visit Vermont's Stratton Mountain for a few days with my two youngest, Joshua, 4, and Morgan, 9. I selected Stratton because I was looking for a ski destination in Vermont within a two hour drive from the airport at Manchester, New Hampshire. Why Manchester Because Southwest flies there from BWI for around $75 round-trip. 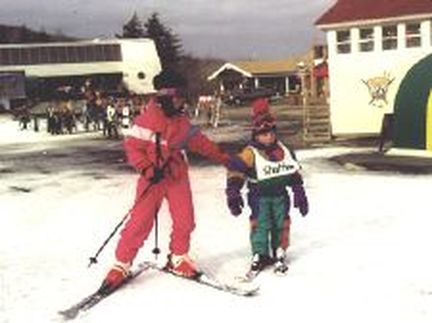 ﻿Stratton has a world-class snowboarding program and special 3 day camps for children. Stratton was also high on the list of friends who sung its praises as a family-oriented destination. This attribute was an important consideration for me. Josh had reached the age when his two sisters had begun to ski under their own power. I was concerned that his first critical experience on the slopes be a good one. Having fun during these first few days will put kids on the right track for a lifetime's enjoyment of the sport. On the other hand, a negative first impression will be difficult to overcome. Just ask my wife.

In telephone conversations with ski school staff, I had satisfied myself that Josh and Morgan would both be well tended for in ski school while I skied off the North American chairlift servicing trails from the 3,800 foot summit.

There are undoubted advantages to skiing between the popular winter vacation periods. Everything is cheaper, from accommodations to lift tickets. There are far fewer skiers and many more parking spaces close to the lifts. During our stay there were just five kids in the entire ski school -- a number that balloons to 250 during the holidays.

For all of these welcome advantages, there are tradeoffs. Even if there is enough snow, many trails and lifts may not be open. None of Stratton's evening mountain sledding and snowboarding diversions were open. We were staying in a two bedroom condo in the Village Watch complex that advertised itself as "ski in ski out." True enough, but the chairlift outside our condo was not operating. There was no snow and not enough traffic to justifying making it.

Still, a ski experience is evaluated on the quality of the skiing--on the slopes, in the halfpipe, or on the nordic course. And it was on the slopes that Stratton, despite the complete absence of natural snow and limited terrain on offer, excelled.

The skiing from the top was some of best I've experienced in the East in many years. Stratton is a cruising mountain. There is lots of moderate steep but easy- flowing terrain off the top -- under the North American lift, or on the Spruce and Tamarack trails, which could be considered a smaller version of Steamboat's famous Heavenly Days slope. For most part, aside from the well-mannered snowboarders who flock to the mountain, I had the upper slopes, with their wonderful views of Bromley nearby and Mt. Snow in the distance, almost to myself.

I spent most of my time skiing the top half of the mountain while Morgan skied the American Express lift and the Betwixt trail under it with her instructor and one other girl her age. The long, varied, good intermediate terrain was guaranteed to increase her confidence, and it did. 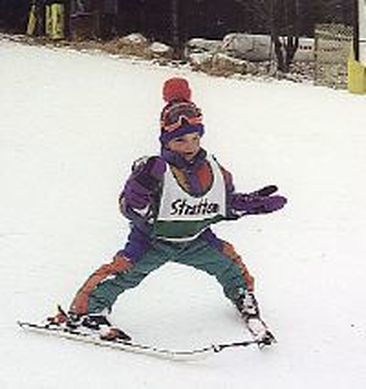 ﻿﻿Josh surprised me with his good humor and enthusiasm not just for the sport but for ski school as well. And why not. He had virtually one on one attention by a new but committed instructor for two of his three days on skis.

Teaching children this young to ski is as much of an art as a science. Some kids like to eat snow rather than ski on it, and instructors must be prepared to accommodate them. I did see something like this with Josh on his first day and I watched for a few minutes until he was picked up by instructor. I admit that I was concerned that the staff of two was overwhelmed by the four kids in their charge.

They must have done something right because after a 14 hour sleep Josh was raring to go, determined to ski off the just-opened Tyrolienne chairlift.

For two days Josh climbed up and skied down in an area at the base. He used both the unmotorized "magic carpet" and learned how to sidestep. When he tired he was simply carried up fifty feet or so by his instructor. He loved it and unlike my other kids, was not fazed when he happened to see me during his class.
​
Having put two kids through their paces already, I knew what kind of attention Josh should be receiving. When I learned that his instructor Chris would not be working the next day I made a point to ask that he return. The school staff was happy to accommodate my request but would not have had I not asserted my interest in maintaining continuity in Josh's instruction. 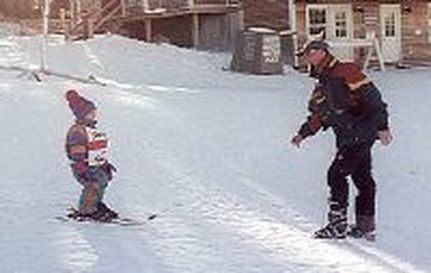 Chris was new to the game and admitted that he preferred older kids. But he did great with Josh. He professed opposition to the "edgy wedgy" that helps kids make the snowplow shape with their skis when I brought it up. He did, however, put one on Josh and the payback was immediate. Josh made the "pie" with his skis and quickly learned how to stop -- the key prerequisite to passage on the chairlift and up the mountain. Skiing down the mountain, Josh was in ski heaven. Like most four year olds, he was absolutely uninterested in turning, preferring instead a fast run down the fall line, with father and instructor in fast pursuit.

After skiing we would make a quick change into bathing suits and head for the pool and hot tub at the Sport Center nearby. This indoor center is a multi-faceted exercise facility, used by visitors as well as residents. Temporary membership was part of our condo package. More often then not, the kids were too tired to go out for dinner, preferring instead to eat while watching television. Mulligan's, a restaurant in the mountain commercial complex, was touted by many as a good family dining destination. For those whose appetites range beyond burgers and seafood, try Portobellos in the Liftline Lodge in the resort complex area. That's where my wife and I (sans children) will be on our next visit.