The article was originally published by the Washington Post.
Sometimes it works.

​The planes, the snow, the weather, and most important, the kids, all cooperate to provide parents with a real, enjoyable ski vacation. Our March ski week at Canada's Mont Tremblant -- a venerable resort in Quebec's Laurentian mountain range -- proved to be an authentic holiday for my wife, myself and our two daughters, aged 4 and 7.

I must admit that I have never considered eastern Canada to be a preferred ski destination. I was concerned that the hard-biting Canadian cold would prove too much for the kids and my fair-weather-skiing spouse. While this is certainly the case in mid-winter, during our March visit the children didn't seem to notice that it rarely got above freezing.
​
Tremblant was also attractive because our elder daughter, Eve, studies in Montgomery County's French immersion program, and she was anxious to put her new skills to use. Under such circumstances, Quebec proved far more economical and convenient than a visit to the French Alps.

I had also come to realize that the girls simply were not interested in my eternal search for untracked powder. They just wanted to have fun on skis. As long as a good time was to be had, they've been just as happy skiing in fog-shrouded rain at New Hampshire's Bretton Woods as at Steamboat Springs, Colo.

Our good luck started at the airport, where we boarded a 9 a.m. nonstop flight from Baltimore-Washington International to Montreal. The plane was only half full, an impossibility on March flights to western ski resorts. By 10:30 we were at the car rental counter in a delightfully desolate Montreal airport.

Two and a half hours after leaving BWI -- barely enough time to fly halfway to Denver -- the kids were changing into bathing suits in our hotel, whose main attraction was a steamy outdoor swimming pool. Later that afternoon, we visited the recently opened Biodome, which offers a variety of natural habitats -- from a sultry rain forest complete with alligators and oversized parrots to a slice of the Antarctic swarming with penguins.
​
But we were all eager to get out on the slopes. The 90-minute drive on Highway 15 from Montreal to Tremblant is studded with small ski hills just right for families with small children. Mont Saint-Sauveur, Sainte Adele, Mont Sauvage and Mont Blanc offer "Les Quebecois" quick and inexpensive alpine getaways.
Mont Tremblant is the jewel in the crown of Canada's eastern slopes. While no bigger than its cousins in New Hampshire and Vermont, Tremblant offers a surprisingly wide range of intermediate and expert skiing, with trails longer than its 2,131-foot vertical drop would suggest.

The resort was established in 1939 by an eccentric American who spent a small fortune creating a small mountainside village with an authentic French Canadian ambiance that, during its heyday, counted the Kennedys and Fondas among its regulars. During the '70s, however, Tremblant fell far behind the leaders in the ski industry. Today, on the eve of a multimillion-dollar modernization, the resort retains the comfortable, intimate feel of a place that time has passed by.

The great rooms in Mont Tremblant Lodge retain the elegant atmosphere of Ryan's original patrician vision. But those looking for an upscale skiing experience will have to wait for the new condominiums. Rooms in the lodge are on the small side. There are no marble bathrooms, hot tubs or Jacuzzis. There isn't even a swimming pool. Our nearby chalet could best be described as pre-L.L. Bean -- a massive stone fireplace in a pine-paneled room of rustic, worn furniture. There was no kitchen, and the bathroom floor groaned every time we stepped on it.

It was great! There was nothing my kids could do to this place that hadn't already been done. And we spent so little time there that we didn't even notice that the television was broken.

Tremblant offers a comprehensive program of ski instruction for children and adults from Monday through Thursday. There is a daily morning lesson, followed by lunch and a return to mountain instruction in the afternoon. Thursday night, each class eats dinner together in the main lodge. After dinner the kids watch a ski video in which they are the stars, and line up for awards and group pictures.

What separated Tremblant from other ski resorts we'd visited, however, was the complete after-ski program for the kids. The Tremblant Lodge discovered the attraction of children's programs decades before Club Med introduced them to the baby boom generation.

Each day after skiing, there was a rush to the game room, where a couple of ski instructors supervised a variety of hands-on activities. Kids could choose to eat dinner with their peers at a supervised table, as mine always did, while parents sipped Irish coffee undisturbed in front of a crackling fire. After dinner, there was serious sledding on the bunny slope, followed by a movie. This hectic schedule offers parents the unaccustomed, and slightly disconcerting, pleasure of dining a deux.

At 9 p.m. we'd drag our kids, exhausted from the day's activities, away from this heavenly regimen for the quick walk under the stars to our chalet and a good night's rest before hitting the slopes once again.
Eve has skied since the age of 18 months, when she began traveling downhill on my back. By 3 1/2, she was riding chairlifts on her own. It was she who reminded me that skiing can be fun anywhere, under almost any conditions.

During other ski trips, it had often been a struggle to maintain her interest in ski school. Tremblant offered Eve two enticements that kept her coming back day after day -- so much so that I had trouble stealing her away for an afternoon of family skiing. The key was the friendships she made with classmates who, like her, were enrolled for the entire four days of instruction. This system created a sense of camaraderie among the class of eight, whose ages ranged from 7 to 10. Most were English-speaking Canadians, but instruction was bilingual. 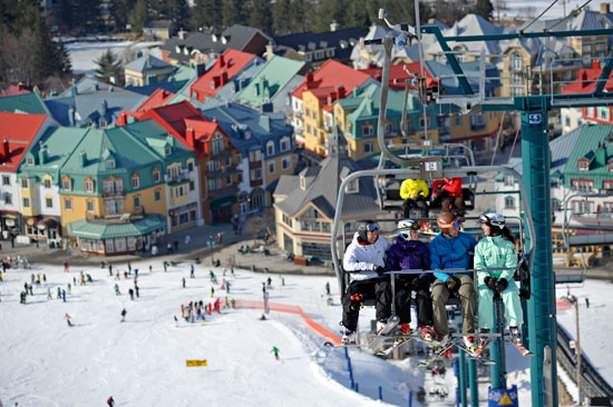 The other inducement was Eve's growing prowess on the slopes. After a morning of skiing, the kids would have lunch with their families before returning for the afternoon lesson. This lunch break would normally have marked the end of Eve's school participation for the day. But the prospect of returning to her regular ski buddies, and the thrill of learning to use ski poles, kept Eve a happy member of ski school throughout our holiday.

Four-year-old Morgan's Tremblant experience was even more momentous, for it marked her skiing debut. For the first time in six years, I was gratefully surrendering my Gerry pack, in which both Morgan and Eve had skied with me as infants. Now Morgan too would learn to ski under her own power, and I was anxious that her first experience would be a good one.

Programs for beginning young children (ages 3 to 5) have become a staple of many ski resorts in the last decade. And the parade of tiny tykes on skis cruising fearlessly down the slopes is a testament to their success.

These programs vary in method and intensity, but the quality of instruction is the one constant that determines their success. The program at Tremblant offers kids a chance to develop confidence and ability at an unhurried pace. So, for parents who demand that ski school produce a certain level of ability for their children -- and there are quite a few who do -- Tremblant might be a disappointment.
For everyone else, however, Tremblant's method of instruction accomplishes its most important task: making skiing fun.

Morgan was one of five beginners. They were attended to by a single bilingual instructor, Sylvia, who had the patience of Job and the enthusiasm of a teacher on her first day of class. In the first session, the kids didn't get near a downhill slope. Instead they marched around on their new boards and learned basic walking and turning steps. There were plenty of chances to simply play in the snow, and many trips to the nearby day-care center for cookies and hot chocolate.
​
They key element at this beginning stage of skiing, and the basic prerequisite to traveling up the mountain lifts, is developing the ability to form skis in a consistent wedge -- the old, reliable snowplow.
I don't know what magic was invoked, but by Tuesday Morgan and her classmates were tentatively skiing, wedges firmly in place, down the little hill at the bottom of the bunny slope.

The next step was the ride up the T-bar -- two at a time with Sylvia in the middle -- right past our chalet to the top of the gently sloping beginners' hill. There the kids waited until Sylvia returned with the next pair. Children who were too tired or simply uninterested were allowed to play at the bottom or to retire to the day-care center.

After the third day of lessons Morgan, alone among her classmates, was deemed ready to take make the leap to the bubble chairlift (recently installed to protect against Tremblant's howling winter gusts) to the top where the Nansen trail snakes its way lazily from top to bottom.

Morgan learned her lessons well. She followed Sylvia down the mountain, stretching her arms out like an airplane and dutifully turning on command. To gain speed on the flats, she made like a "bee" and put her hands on her knees.

The trail was long, too long. Tremblant lacks a short easy slope for beginners of all ages. But Sylvia was ready when Morgan tired. She extended a bamboo pole (the kind used for ski racing gates) for Morgan to grab onto, and the two of them cruised for a while, side by side. Later I tried using the pole on a run I took alone with Morgan, and while my daughter enjoyed it, I found myself struggling a bit to hold our speed in check.
​
While Morgan was doing fine on skis, even snowplowing her way through some gates, there were still some basic conceptual problems to work out. Like her sister when she was 4, Morgan had trouble understanding that one couldn't simply ride the chairlift all day. When we take the chairlift up, I patiently but fruitlessly explained, we had to ski down.