This article was originally published by the Family Travel Forum.
Avid skiers take the family on holiday to Quebec's Mont Tremblant resort for mountains of fun.

The location and timing of our family ski vacations owes little to fancy brochures touting the competitive advantages of one resort over another or the quality of snow to be had as early as Thanksgiving or as late a Memorial Day. We are slaves to both the iron logic of the school calendar, devised with little regard for the piste-deprived, and the tolerance of our kids for the vagaries of ski travel.

As a transplanted New Englander, I pine for the venerable February vacation, a.k.a President’s Day or Washington’s Birthday week, after one president who had the good sense to be born when the snow in New England is at its winter best. In metropolitan Washington, DC, this once grand occasion has been reduced to a miserly three-day weekend, barely enough time to get through one of the holiday’s longer lift lines, let alone properly remember the good deeds done by our first and sixteenth presidents.

These constraints, however, can also create opportunity, which is how we were initially drawn to postpone our February ski trip and consider Mont Tremblant, a venerable Laurentian ski resort a 90-minute drive from Montréal. Not to put too fine a point on it, but you’ve got to be crazy to ski Tremblant before March. It’s too windy and too cold – although modern day groomers are expert at banishing the black ice that used to terrorize skiers during my youth. Yet the bone-crushing cold of a Canadian winter mellows by Easter vacation in April, setting the stage for great spring skiing in the East at a time when other mountains have been shorn of natural snow and most skiers have parked their equipment in the basement. 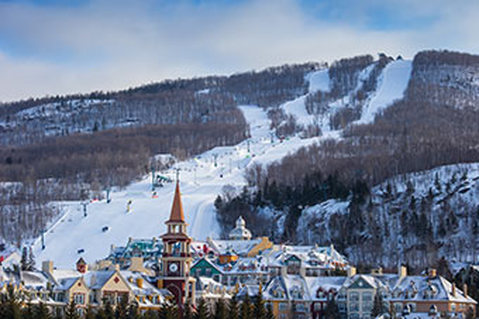 Spring Thaws Create Delightful Conditions
​
Our visit to Tremblant last April offered picture-postcard blue skies and packed powder that by afternoon had matured into a very skiable cold granular. Thanks to a bountiful winter, there was still plenty of snow of the natural and manmade varieties. My 9-year-old son Joshua and I were in search of sunny southern exposures and fast cruising runs off the aptly named Le Soleil quad chairlift and the main gondola. We began our day fashionably around ten, when the snow had just begun to soften. We skied without interruption down Kandahar, Grand Prix, and Laurentienne, which follow the vertical drop of 645 meters from the 875-meter summit to the base. Tremblant, like most mountains these days, belongs to the zero-tolerance-for-moguls grooming school, except for the steepest of runs. On sunny crisp days like those we encountered, this makes for fast, fun skiing.

The slopes were busy but by no means crowded, and Canadians being Canadians, everyone practiced good ski etiquette and skied slopes that matched their ability rather than their ego. Such good sense enables better skiers to cruise more difficult terrain without distractions and keeps others skiing challenging intermediate and beginner trails consistent with their abilities.

Among the latter I include my wife and our 15-year-old daughter Morgan, whose interest in skiing depends upon how well her boots match her latest outfit. Morgan, like her older sister Eve, a freshman at McGill who stole a few days to be with us, preferred to sleep in most mornings before making an appearance just in time for lunch. We would meet at one of the restaurants gracing the central square that is the centerpiece of the extreme makeover resort owners Intrawest have undertaken during the last decade. Josh and I were glad for the rest -- and the nachos, the hot chocolate, and the beer. The sun was shining, the deck chairs were comfortable, and an afternoon of easy cruising beckoned. New was the N'Ice Club, a lounge where drinks are served in ice glasses on tables and stools made of snow blocks and sculpted ice. 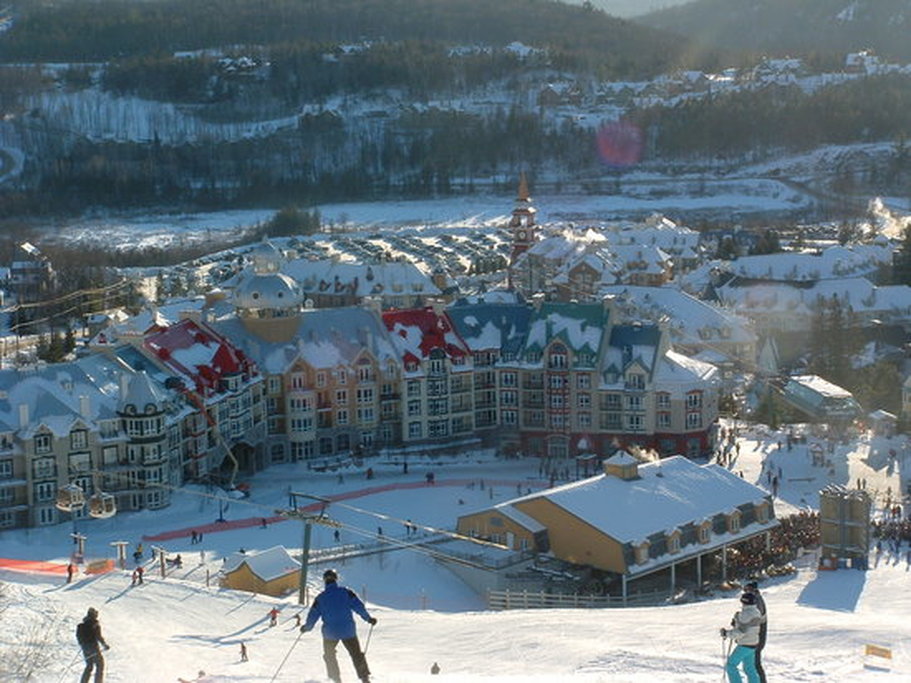 ​Mont-Tremblant Offers Something For Everyone

​The purpose-built town center places many of the hotels, shops and restaurants at the mountain base, transforming what used to be a typical, small, bare bones New England ski experience into a world class destination that consistently scores in the top tier of North American ski destinations.
​​
The Mont-Tremblant season runs from mid-November to late April, with hundreds of snow guns ready to supplement an average annual snowfall of more than 150 inches. Josh, Eve, and I stuck to the advanced intermediate and expert trails, which number almost 50. We were partial to the mountain’s south side, not only for the sun and the Lake Tremblant views, but also because some of the lifts serving expert terrain on the north side had been closed for the season, reducing the skiable terrain and increasing the lift lines at the bottom.

Tremblant actually has a lift capacity of more than 27,000 skiers per hour, but we never experienced anything close to that number during our spring week. Dori and Morgan were more than content to sample the beginner runs, especially the six-kilometer-long Nansen, which runs in a series of lazy switchbacks from summit to base.