Mention the Homestead, the Virginian resort in the Allegheny mountains which traces its origins to a hostelry built in 1766, and most people think of "old money." Images of men wearing green sports jackets just back from a round on one of three golf courses or sheet shooting, and ladies enjoying a quiet, respectable afternoon tea at well appointed tables.

There is much about the Homestead today that recalls the time when the resort -- three and one half hours distant from Washington, DC -- was an exclusive playground for blue bloods. For one it is not inexpensive. And some of what the Homestead offers is simply passe -- like the shops offering a variety of clothing few nineties shopper would think of buying.

But most of what is on offer is charming. The fireplaces roaring; the library, thick with books, quiet, and the smell of leather; the staff, attentive and efficient; and the dining, unhurried and elegant.

There is a big part of the Homestead that harkens back to an era when families with money would retire to the country for weeks or even months at a time. It offers guests enjoyment and relaxation on a grand scale. The property has its own power generating station and ski slopes, over 100 miles of riding, hiking, and mountain biking trails, and the famous warm springs, with separate facilities for men and women. 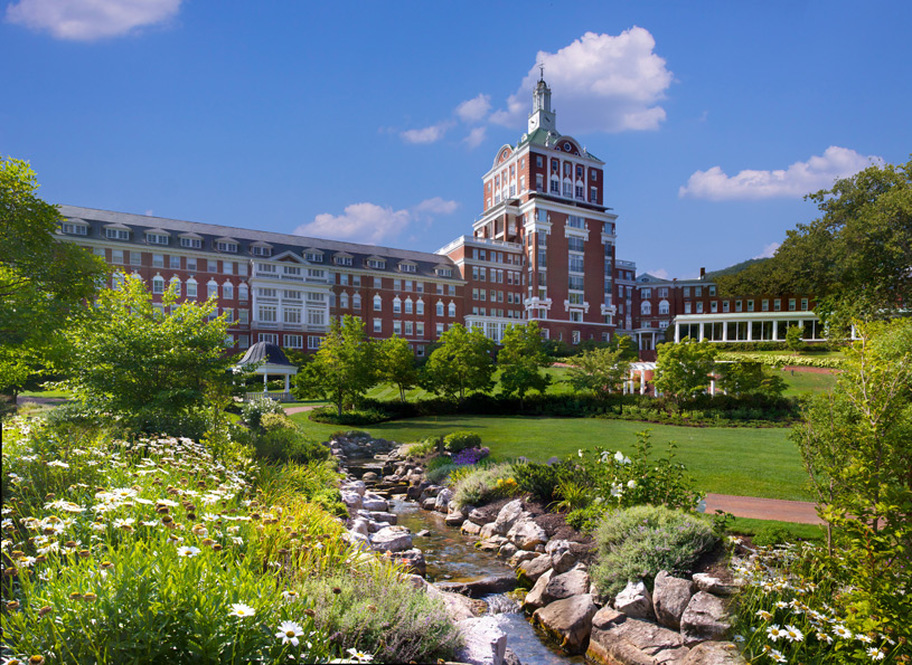 The magnificent entry to the hotel is flanked by long rows of rocking chairs looking out upon the vast, well-manicured grounds. There are tennis courts nearby and the golf pro shop, with a division of golf carts standing ready.
​
Some visitors no doubt come to the Homestead to sit and rock, but not my family! During our four day stay earlier this spring, we engaged in some very intense vacationing, more typical of the young families that a rejuvenated Homestead, now under new management, is trying to attract.

There is a lot to be said for a vacation getaway that is a reasonable drive from the metropolitan area, where the food and accommodations are great, where adult diversions are plentiful, and where the kids can be kept busy for days on end... and all without need of a car!

The Homestead is such a place. A multi-million dollar renovation aimed at enticing a new generation of vacationing families -- modernizing time worn facilities without a wholesale destruction of the resorts traditional ambiance -- is well underway. To judge by the reaction of my two girls ages 10 and 7, the Homestead is on the right path. And what parent will complain about a vacation where a grand motherly baby sitter [who waited on your table at lunch!] happily shows up at your room so that you can enjoy dinner just for two?

We spent many an hour in the renovated indoor pool, which in early April, was often ours alone. When the pool grew tiresome we headed for the bowling alley nearby, passing on our way the original hot springs pool.

When the weather broke, my wife, along with our toddler Joshua and daughter Morgan, hired a carriage for a long ride along one of the many mountainside trails that cris cross the property. My other daughter Eve and I headed for the horses which had been brought up from the stable for a trail ride. 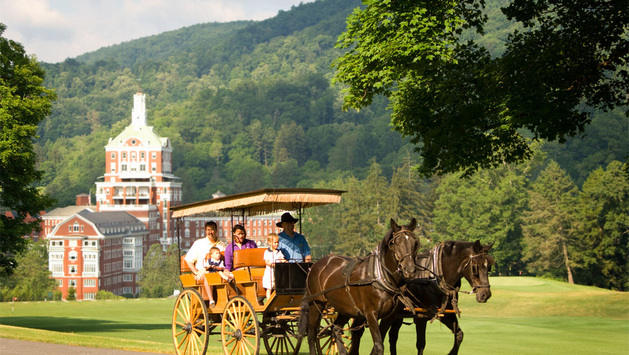 The Homestead welcomes riders of all abilities and ages. It even has stables available for guests who like to bring their own horses along. Eve has just begun riding lessons, and like many a girl her age, has fallen in love with horses.

The day before our ride, we visited the stables, where she met all the horses and fed carrots to quite a few of them. The stable staff proved very accommodating, and not at all anxious to cut short what was, for my girls, a very exciting outing. Having settled upon one particular beast Eve greeted her the next day as if she were an old friend . With a stable hand in the lead, Eve and I rode for one hour, skirting the golf course, crossing the ski slopes which still retained a hint of winter snow, and trotting up and down gentle, well-marked trails. Eve was in horse heaven. I was pining for a massage.

My wife, however, won the massage sweepstakes. I played with the kids one morning while she worked out on a treadmill in the newly reopened fitness facility. Suitably limber, she headed for the massage table, followed by a facial.

Many of my forty something friends are taking up fly fishing. They sing the praises of the sport as a relaxing way to be outside. I tried it one morning, and I see what they mean. The Homestead offers anglers of all abilities an opportunity to test themselves against the wily trout along a three mile stream running between the Cascades and Lower Cascades golf courses. I spent a couple of hours casting about, and cant say for sure if I got a bite.

﻿"To judge by the reaction of my two girls ages 10 and 7, the Homestead is on the right path"

After fishing, daughter Morgan and I headed up the 2 mile Cascades Gorge trail. It winds gracefully along the trout stream, climbing over rapids and alongside boulders the size of small buildings. It was a beautiful walk, not too much for a young child, or, Im told, for many of the seniors who visit during summer.

What would a family vacation be without at least one crisis? Ours occurred at the beginning of a bike ride to Lake Moomaw along Richardsons Gorge, five miles distant from the Homestead. The trip was lead by Tray Asbury, owner of Virginia Outdoor Adventures, who offers a variety of bike riding options to Homestead guests. Our first dilemma arose when Morgan proved unable to ride her bike. We should have let her practice at the hotel before staring out some miles away.

"No problem," say Tracy, who simply put Morgan on his bicycle seat and pedaled away. Then it was Joshuas turn. He has always ridden without complaint, seated in a child carrier on the back of my mountain bike. Today, however, he was to sit in one of those two-wheeled enclosed carriers that trail along behind a bike ... and he was having none of it.

It looked as though we were in the running for the shortest bike trip on record. But no, snatching victory from the jaws of defeat we hit upon a solution. As we passed a small country stream, my wife graciously [and not too unhappily] offered stay behind with Joshua while we continued on our way. Morgan settled into the child carrier and off we went, riding for miles along a dirt road which skirted the Jackson River on one side and butted up against hedges of the most extensive wild rhodedendra I have ever seen on the other. Apart form the solitary pickup truck we were alone on this glorious, gentle rural byway.
​
On our last day at the Homestead, Eve was still intent on indulging her passion for horses. So before we left we mounted up once again, for another -- and not the last I'm sure -- tour around the venerable grounds of the Homestead.